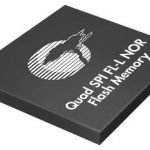 Although NOR represents only 4% of the flash market, NOR unit shipments increased 33% last year while the ASP jumped 23%.  The 2Q Update also forecasts the NOR flash market will rise another 21% to $3.5 billion in 2022.

Three companies accounted for 91% of NOR flash memory sales in 2021 (Figure 1).  Winbond was the largest NOR flash supplier with sales that topped $1.0 billion, which amounted to 35% of NOR marketshare.

Ranked second with $942 million in NOR flash sales last year was Macronix, which captured 33% NOR marketshare. NOR represented 52% of Macronix’s total IC sales in 2021.  Essentially all of its NOR devices were produced using 75nm and 55nm process technology last year but in 2Q22, the company began its transition to 45nm NOR flash production.  Communications, automotive, and industrial/medical applications were the big growth drivers for Macronix’s NOR flash business in 2021.

While NOR flash is not a serious contender for most new, high-capacity storage applications, it remains a useful and reliable memory option for code storage and in many low-end embedded applications.  In the automotive space, for example, NOR is a key component in dashboard instrument clusters, infotainment systems, and advanced driver assistance systems (ADAS).

In the industrial segment, NOR flash memory is used to provide consistent and secure access to code data and medical records of patients.  NOR flash is also part of the market for Internet of Things (IoT) applications, including many new healthcare products that provide remote diagnosis and monitoring.

Memory density requirements are increasing as more software code is used to boost the performance capabilities of new system designs.  Coupled with the fact that NOR flash is difficult to scale means that for densities greater than 1Gb, NOR flash may not be as cost-effective as some alternative memory solutions.

IC Insights believes this will cause a gradual shift in demand away from NOR flash to higher density alternative memories such as single-layer cell (SLC) NAND and magnetoresistive RAM (MRAM), which have slowly begun replacing NOR flash in many new system designs.