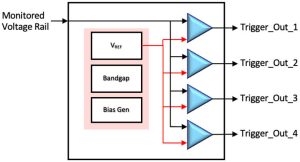 Agile Analog has added a voltage sensor to its portfolio of intellectual property, for IC designers that need to monitor fluctuations on on-chip power rails.

Called ‘agileIR Drop’, despite its name, it does not monitor the voltage difference from end-to-end of a conductor. Instead the IP block provides real time monitoring of voltages at single points on rails to detect hot spots or shorts as well as input and load-based fluctuations.

But there is more, said Agile CEO Barry Paterson: “It is important to know that IR drops can become worse over the life-time of a chip, caused by electro-migration – over time, metal molecules can migrate within wires when currents flow, narrowing them in places which increases the resistance in those locations – hence the need for continual in-chip monitoring.”

The block consists of a voltage reference and comparators set (four in diagram) at different threshold levels for multi-level detection – or one comparator for single-level.

Comparator reference thresholds can be adjusted during operation to support dynamic voltage and frequency scaling.

Intended to be battery-operation compatible, active current is in the order of 120μA, powering down to under 1μA.

Detection time is typically 25ns, according to the company, and “threshold accuracy is 5% and 1% when trimmed with a step size of typically 20mV”.

Based in Cambridge UK, Agile Analog has in-house analogue compiler technology that allows it to automatically adapt analogue blocks from its library for different semiconductor processes. It is “a unique way to automatically generate analogue IP to meet the customer’s specifications and process technology. Effectively, the design-once-and-re-use-many-times model of digital IP now applies to analogue IP for the first time.”

Foundries including TSMC, GlobalFoundries, Samsung Foundry and SMIC are supported.

The company can be found on booth 2340 at DAC in San Francisco this week.