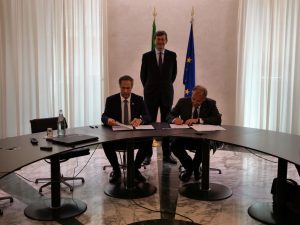 They are the first two contracts of Italy’s implementation of the “Next Gen EU” initiatives for Space – with the European Space Agency (ESA) as the official Contracting Authority – and they are looking to develop next generation propulsion technologies and launch system architectures.

The aim is to build on capabilities established in Italy since the early 2000s through the Vega, Vega C and Vega E programmes.

The first contract, funded with €217.5 million on completion, is for the development – by 2026 – of an in-flight demonstrator of new technologies and architectures for a two-stage-to-orbit liquid propulsion small launcher powered by green LOX-methane engines.

The second contract, for €120 million, is for the development of a new LOX-methane green engine with High Thrust to be tested on ground by 2026 for qualification. 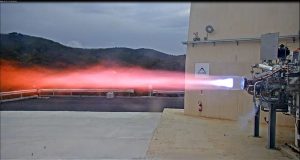 Avio has experience working on cryogenic LOX-methane propulsion, in cooperation with the Italian Space Agency, and recently oversaw the first successful ground testing in Europe for this type of rocket engine. Specifically, a new M10 liquid oxygen/methane engine for Vega-E was successfully tested in May at Avio’s Space Propulsion Test Facility (SPTF) in Sardinia (right).

LOX-methane technologies, with their clean-combustion characteristics, are suited for potential re-usability and allow the extensive use of single-material/single-part 3D-printed manufacturing, the company highlighted.

The company says an ambitious hiring plan has begun, since the beginning of 2022, to upgrade its engineering and operations talent pool, leading to over 150 new hires to date (it has 1,100 employees).

More “opportunities for young competent and motivated engineers will be available in the next 12 months”, it says.

“With these very important contracts Avio will be able to expand its capabilities in next-generation liquid propulsion launchers well beyond Vega E, preparing the ground for increased competitiveness for the next decade,” said Avio’s CEO Giulio Ranzo.

“The in-flight demonstrator and a high thrust engine are the key building blocks that, in combination with a robust past experience at system and propulsion levels, will enable improved flexibility and cost-effectiveness of our products and solutions. Italy will thus hold full-fledged capabilities to suit any demand requirement for space launch and in-space transportation.”

“Vega is a key strategic asset contributing to the freedom of action for Europe in space,” said ESA’s Director of Launcher, Daniel Neuenschwander.

“With the imminent inaugural flight of Vega C, the preparation of Vega E and now the signature of these contracts to prepare the following generation of versatile, competitive and increasingly environment friendly launch services will be offered on the market. ESA as qualification authority is supporting the clear plan ahead for future space transportation services”