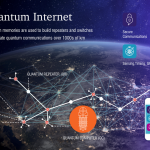 “To unlock the full potential of quantum devices, they need to be connected together into a quantum network, similar to the way today’s devices are connected via the internet,” says AWS, “despite not receiving the same level of attention as quantum computers, quantum networks have fascinating possible applications.’

“One of them is enabling global communications protected by quantum key distribution with privacy and security levels not achievable using conventional encryption techniques,” adds AWS, “ Quantum networks will also provide powerful and secure cloud quantum servers by connecting together and amplifying the capabilities of individual quantum processors.”

”Single photons enable many of the special capabilities of quantum networks and simultaneously pose the great challenge: quantum mechanics prohibits their amplification, limiting the network range,” includes AWS, “also, the weakness of single photons complicates interfacing them with today’s quantum computing devices. This means that special new technologies, such as quantum repeaters and transducers, will need to be developed in order to implement global quantum networks.”

Amazon has previously setup the Amazon Bracket Cloud quantum computing service and the AWS Quantum Solutions Lab – both focussed on short-term quantum issues – and also the AWS Centre For Quantum Computing which, like the Centre for Quantum Networking, is focussed on long-term challenges,