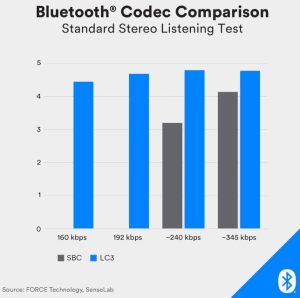 It uses an LC3 (low complexity communications codec) to deliver its quality/bit-rate/energy balance.

“Extensive listening tests have shown that LC3 will provide improvements in audio quality over the SBC codec included with [Bluetooth] Classic Audio, even at a 50% lower bit rate,” according to Manfred Lutzky, head of audio at Fraunhofer IIS, where the codec was developed. 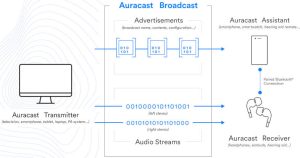 Taking an example of Bluetooth earbuds paired with a phone, both in the environment of a Auracast transmitter:

The phone will receive the advertisements, enabling it to tell the user that Auracast audio is available – much in the way a phone might display available Wi-Fi terminals.

Use-cases include gyms where exercise machines face a bank of televisions tuned to different channels.

“LE Audio extends the boundaries of what’s possible for the wireless audio market, including the introduction of Auracast,” said Bluetooth SIG CEO Mark Powell. “Our members overcame the many challenges placed on them these past few years to complete the largest specification development project in the history of the Bluetooth SIG.”

LE Audio qualification can now be sought to and “consumer products supporting LE Audio, including those with Auracast, are expected to come to market in the coming months”, according to the SIG.

Formed in 1998, the Bluetooth SIG is the not-for-profit trade association that oversees Bluetooth technology. It has more than 38,000 member companies.