You are invited to select the university research project from the last year that you feel will make the largest impact on the commercial market in the next five years. You have until 1 November to cast your vote.

A shortlist of five projects has been selected by the Editor of Electronics Weekly: they are (alphabetically) from Bristol, Imperial College London, Heriot-Watt, Southampton and Surrey. Read the entries below and cast your vote!

Winners will be revealed at a prestigious awards dinner at the Grosvenor House hotel on London’s Park Lane on Wednesday 30 November. 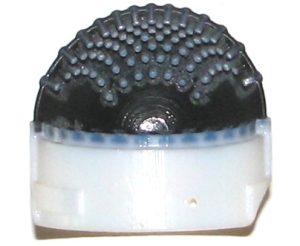 Researches at the University of Bristol have created an artificial fingertip that produces signals that appear to mimic human touch nerve signals. “We found our 3D-printed tactile fingertip can produce artificial nerve signals that look like recordings from real, tactile neurons,” said Bristol’s professor of robotics Nathan Lepora. “Human tactile nerves transmit signals from various mechanoreceptors, which can signal the pressure and shape of a contact. Work by Phillips and Johnson in 1981 first plotted electrical recordings from these nerves to study tactile spatial resolution using a set of standard ridged shapes. We tested our artificial fingertip as it felt those same ridged shapes and discovered a startlingly close match to the neural data.” The fingertip is essentially a thin-walled hollow elastomer dome. Through the rubber are printed short rigid rods in a contrasting colour. 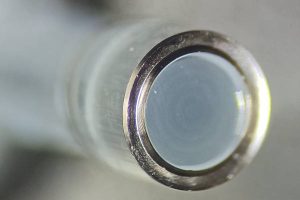 Researchers at Heriot-Watt University have improved a fibre optic endoscope in a demonstration of laser-enhanced chemical etching, and developed a way to significantly speed up such 3d patterning of silica blocks prior to etching similar structures. The endoscope is a commercial single polymer 1.5mm diameter fibre that, instead of a single core, has 13,000 parallel cores to allow an image presented to one end to be seen at the other. In use, illumination is provided by shining light down through the bundle from the viewing end, and displaying what bounces back from whatever the tip of the fibre is in contact with. The team uses the outside few layers of fibres – around 18% of the 13,000 – to send light down from the viewing end, and use the middle 82% (~1.4mm diameter) for viewing.

ICL and more stability and efficiency for perovskite solar cells 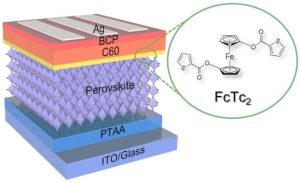 Metal-organic ferrocenes could make perovskite solar cells more stable, according to Imperial College in London. The cells in question are a joint venture between Imperial and City University of Hong Kong (CityU). “Our collaboration with was beautifully serendipitous, arising after I gave a talk about new ferrocene compounds and met Zonglong Zhu from CityU, who asked me to send over some samples,” said Imperial chemist Professor Nicholas Long, “Within a few months, the CityU team told us the results were exciting, and asked us to send more samples, beginning a research program that has resulted in perovskite devices that are both more efficient and more stable.” They are electron-rich, improving electron mobility between the energy-harvesting perovskite layer and subsequent layers, boosting conversion efficiency.

Researchers from the University of Southampton and Iceland have demonstrated the formation of an odd never-before-seen entity from the realm of quantum physics: a cluster of optical vortices with periodic charge flipping. This holds the promise of applications in optical microscopy, quantum cryptography, enhanced-bandwidth optical communication, analog computation, and optical tweezers tech. Optical vortices offer an intriguing opportunity to overcome the bandwidth limitation of fiber optic communication lines. There are only so many transmission channels you can pack in an optical fibre, meaning there’s a limit on bandwidth. However, two vortices even at the same wavelength of light could be distinguished by their charge, so in a way they occupy distinct channels. 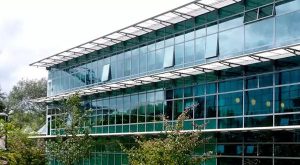 The University of Surrey has created a flexible and stretchy supercapacitor “that can be easily integrated into footwear, clothing, and accessories”, it said. Building one involves transferring aligned carbon nanotube arrays from a silicon wafer over to a PDMS (polydimethylsiloxane) layer in which they are partly embedded. Polyaniline is then polymerised onto the surface of the nanotubes. In capacitors made from the structure, the polyaniline exhibits supercapacitive characteristics due to pseudocapacitance (redox) behaviour – the carbon nanotubes and PDMS add slightly to this through ‘double-layer’ supercapacitive characteristics. At the same time, the nanotubes provide support for the polyaniline which accommodates its expansion and shrinkage as charge cycles in and out.