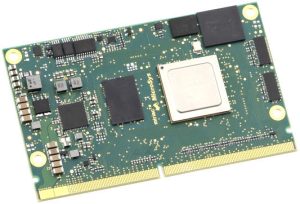 Intended for real-time mixed-critical safety applications, “thanks to the NXP S32G3 processor, the MPX-S32G399A system-on-module surpasses its NXP S32G2-based predecessor with 2.5 times more application processing performance,” according to MicroSys.

Improvements include eight Arm Cortex-A53 cores instead of four, as well as four Cortex-M7 dual-core lock-step pairs instead of three.

The A53 core have Arm’s Neon technology organised in two clusters for applications and services. For the lock-step M7 pairs, MicroSys offers support for dedicated FreeRTOS implementations beside NXP’s standard automotive support. “Clustered and operated in lock-step mode, the set of heterogenous cores of the S32G3 can support ASIL-D applications or any other functional safety standard comparable to IEC 61508,” it said.

4Gbyte of soldered LPDDR4 RAM is included, operating at 3.2Gtransfer/s. Up to 32Gbyte of eMMC non-volatile memory and 64Mbyte QuadSPI flash can also be present, and external SD card storage can be multiplexed with the on-board eMMC.

The module offers multiple native CAN interfaces, as well as FlexRay, LIN and Ethernet support including TSN (time-sensitive networking).

The board support package includes bootloader configuration and Linux drivers, and there is “safety documentations mandatory for certifications”, said MicroSys.

Series production is scheduled for Q1 2023, with OEM evaluation kits appearing this year, with carrier board, cable set and cooling.

The MPX-S32G399A product page can be found here.