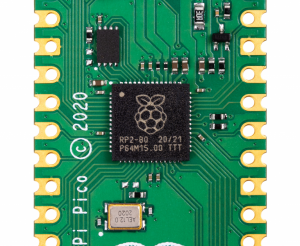 “We risk-bought quite a lot of wafers, and could sell one to two million per month, up to the maximum of our test capacity,” Raspberry Pi Trading’s applications director Roger Thornton told Electronics Weekly in Nuremberg. “You can buy a reel today, and you will have it in three to four weeks.”

The company is hoping to turn the heads of designers struggling to get hold of their favoured microcontrollers due to the chip shortage, offering the 7 x 7mm QFN-56 RP2040, which has two 133MHz Arm Cortex-M0+ cores and 264kbyte of ram, but no flash – instead it supports up to 16Mbyte of external flash over a QSPI bus.

If you are at Embedded World and only want one, and don’t mind it being soldered to a working Raspberry Pi Pico development board, you will almost certainly get it if you head over to the Raspberry Pi stand in the corner of Hall 4A (4A-101).

What about the shortage of Raspberry Pi educational computers?

Supplies are still limited, confirmed Thornton. “When it is not one part, it’s another,” he said. “We are spending a huge amount of time sourcing parts.”

The various Pis are all still being made as part supplies allow, he said, with delivery focussed on businesses that depend on Raspberry Pi boards arriving to survive – “The tricky decision is that we had to prioritise industrial customers,” he said.