Surprising to some, one place to find some of today’s most sophisticated technologies are finding early applications is in professional sports. While sports like baseball and tennis have been using high-speed cameras and computer vision for years, soccer is now just getting into the technology.

This week, FIFA released exciting news that it would use semi-automated offside technology at the World Cup in 2022.

In this article, we’ll look at the technology FIFA is proposing, how it works, and how users will apply it to the future of the sport.

History of Tech in Soccer—VAR

FIFA began introducing high-tech into the sport in 2018 with its video assistant referee (VAR) technology.

A high-level overview of a VAR system. Image used courtesy of FIFA

The goal of VAR was to allow referees, or a special team of VAR experts, to use recorded video footage to replay incidents and come to the correct ruling on a call. Essentially just an instant replay system, FIFA’s original VAR did not introduce any special technology but would instead be implemented by integrating the VAR system into the already existing television broadcasting setup. 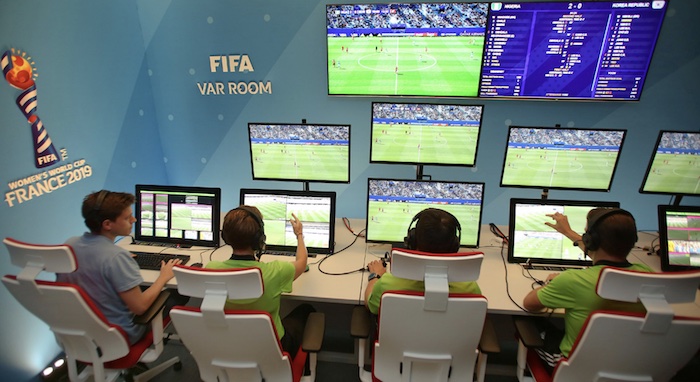 A look at the VAR room in the 2019 Women’s World Cup. Image used courtesy of FIFA

According to FIFA, within this setup, the key priorities for a successful VAR system include synchronicity, latency, and video quality. To ensure this quality standard, FIFA has required that all VAR technologies be certified by FIFA before being used in actual matches.

This week, FIFA has announced that they’ll take its VAR one step further with the addition of semi-automated offside technology for the World Cup in 2022.

Excitingly, the new VAR system is much more technically advanced than previously offered. The first component of the improved system is a series of 12 dedicated tracking cameras mounted underneath the stadium roof to obtain high-quality, low latency video feeds.

Within this, the system will use computer vision technology to collect up to 29 data points on each player, with a sampling frequency of 50 Hz. These data points will include all extremities and limbs that are relevant in making a call and will be used to understand and track a player’s position on the pitch. 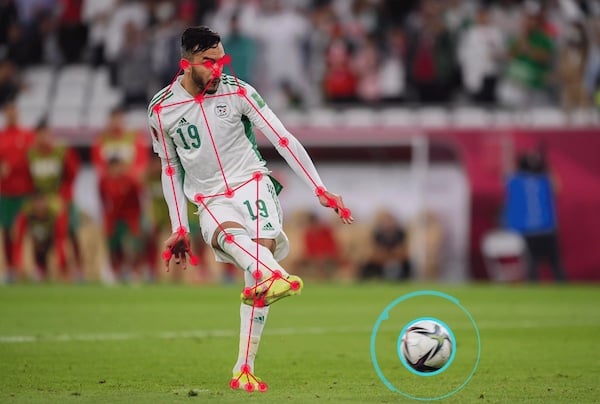 Working alongside the camera and computer vision system is another exciting new piece of technology—Al Rihla—Adidas’ official match ball for the 2022 World Cup.

The new ball comes instrumented with an inertial measurement unit (IMU) which will provide further data about the ball’s position on the pitch. The sensor will be positioned in the center of the ball and send data to the VAR system at a frequency of 500 Hz, allowing for an extremely granular understanding of the ball’s location at all times.

Together, the VAR system will interpret the player’s positioning data with the ball location data to more accurately understand if and when a player is offsides. However, FIFA is saying that the technology is only “semi-automated,” as, before informing the on-field referee, the video match officials will still be double-checking the VAR system and manually validating its claims.

Changing the World of Sports

While the VAR system could impact soccer in terms of improved accuracy of calls, the significance of the technology has the potential to go beyond that. With many of the world’s professional sports adopting more and more high-tech into the game, it indicates the widespread adoption and normalcy of technology in our modern world.

With FIFA’s improved VAR for the 2022 World Cup, we are seeing advanced technologies make their way onto arguably the biggest sports stage in the world.