Foundries are beginning to feel the strain of cancellations and capacity utilisation rates have  declined. 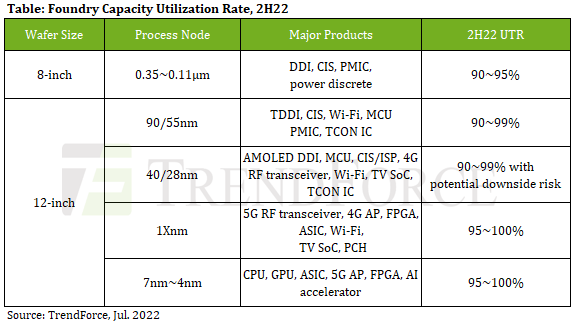 There has been a sustained downgrade of driver IC demand and inventory adjustment has begun for smartphones, PCs, and TV-related peripherals.

The capacity utilisation rate of eight-inch nodes (including 0.35-0.11μm) may decline the most.

TrendForce believes that the overall capacity utilisation rate of 8-inch fabs will be roughly 90~95% in 2H22, while some fabs manufacturing a greater proportion of consumer applications may have to fight an uphill battle to maintain production capacity at 90%.

The same situation has also occurred in mature 12-inch processes. However, since 12-inch products are more diverse and their production cycle generally takes at least one quarter, coupled with upgrades to some product specifications, trends such as process transition have not been affected by broader short-term economic fluctuations.

As a result, overall production capacity utilisation rate is  still around 95%.

Compared with operating rates that hit 100% in the past two years, production line operation has gradually normalised and stabilised, demonstrating a steady balancing of resource allocation.

7/6nm capacity utilisation rate will decline marginally to 95~99% in 2H22 due to product mix conversion, while 5/4nm processes will remain near full load, driven by several new products.

In 2023, TrendForce believes that utilisation rates could drop below 90%.