FPT Industrial showcased the way for farmers’ energy independence at The World Biogas Expo 2022, the trade show dedicated to the biogas industry, held at the National Exhibition Centre (NEC) in Birmingham, U.K. on June 15 and 16.

Visitors were able to see “inside” the genset concept and, through the LED walls, follow the full cycle from agricultural production through electricity generation right up to its use on or outside the farm. The concept is based on the first F28 variable-speed, low-pressure biomethane engine for power generation, with all the fuel deriving from anaerobic digestion of agricultural waste and cattle slurry. The engine is coupled to an FPT Industrial Hybrid Control Management system, featuring an open configuration with 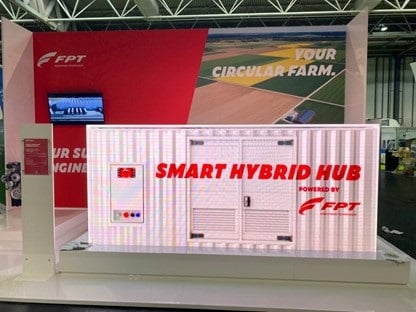 Source: FPT Industrial batteries and inverter equivalent circuit, depending on the mission profile.

“Our aim is to create a virtuous, sustainable, carbon-net-zero cycle, to allow ‘energy independence’ for farmers,” said Andrea Ercolino, product portfolio and marketing manager for power generation at FPT Industrial, “as well as to generate additional revenue opportunities deriving from sales of surplus biomethane. Another step forward for FPT Industrial in the energy transition path.”

In addition to fueling the genset, the biomethane produced on site can even be used to fuel natural gas-powered tractors and commercial vehicles such as lorries and trucks, while the surplus of both electricity and biogas can be fed into the national grid. FPT Industrial’s partner in this project is Bennamann Ltd., a fast-growing British agricultural technology company in the field of clean energy, specialized in the supply and production of ‘better than zero carbon’ biomethane sourced from fugitive emissions of decomposing organic wastes, including farm manure slurry.

Speaking at the Expo, Bennamann’s co-founder, chairman and CTO Chris Mann said “We are proud to be partnering with FPT Industrial to deliver our shared vision of energy independent farming. The Smart Hybrid Hub completes the Bennamann Technology Chain enabling our end-to-end solution from fugitive methane capture, through processing into vehicle grade biomethane, and delivery of fuel, electricity and heat to the farm.” On receiving the ‘Highly Commended’ for the AD Circular Solutions award at the show, Chris added “as the ‘new kids on the block’, we were delighted to receive this recognition, which is underpinned by our strong partnerships making scale-up of energy independent farming possible and so exciting, watch this space!”

One of the many highlights of the concept hybrid multi-mode genset is its capability to meet different customer needs with three main operating modes:

Boosting mode is dedicated to peak shaving with a high load response, with the engine working at full steam and the battery pack stepping in to deliver the needed extra buffer.
Touring mode takes care of all-round durability, with the engine and battery pack alternating operation in order to optimize efficiency and extend the whole system’s lifespan.
Full electric eco mode is designed with fuel economy in mind and its low-load autonomy can be extended thanks to the modular battery packs.

The first Smart Hybrid Hub genset prototype is currently undergoing a series of tests and is being used in training sessions at Chynoweth Farm (Truro, Cornwall, U.K.), home of Bennamann’s on-farm research and testing center. All its working modes and functions — hybrid, full electric and battery charging — have been extensively tested with the F28 natural gas engine fueled by biomethane produced at the farm.

The F28 natural gas engine’s versatility extends well beyond power generation usage. It is actually the engine that powers a New Holland TK methane power crawler tractor prototype, currently working at the award-winning Fontanafredda winery to achieve the first zero-emission Barolo wine by 2025. FPT Industrial’s commitment to natural gas and sustainable agriculture is further demonstrated by the six-cylinder FPT N67 natural gas engine, with 180 hp and 740 Nm of torque, able to deliver the same performance and durability as its diesel equivalent. This engine powers the New Holland T6.180 methane power, the only mass production biomethane tractor on the market and named “Tractor of the Year” for 2022 in the sustainable category, which was on display on the New Holland Agriculture brand booth during the World Biogas show.