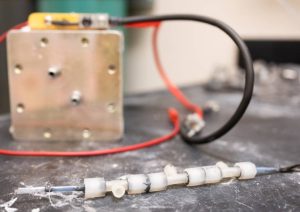 In a proof-of-concept zinc-iodide battery, the reactor part achieved 306.1W/litre discharge and charging at 1,322W/litre.

Key to the concept is using tubes-within-tubes to make the reaction vessel into a self-supporting structure – doing away with the volume-consuming support hardware used in traditional flat plate designs.

In the demonstrator, everything happens within a PTFE tube that has a 2mm bore (see photo).

Down this bore are pushed four thin-walled hollow fibres, just over 0.5mm in diameter, made from the ion-exchange material Nafion – it is the thinness of the Nafion tube walls allowed by this construction technique that leads to the high power density.

Various sealing barriers (see photo) allow catholyte to flow inside the Nafion tubes, while anolyte flows outside them.

Within the Nafion tubes, carbon fibres threaded along their lengths act as one electrode, while the other electrode is a zinc wire threaded through the 2mm PTFE tube outside the Nafion tubes. The electrode are lead out of opposite ends of the assembly for connection.

“The superior performance of the sub-mm bundled microtubular [structure] was also demonstrated by finite element analysis,” said Georgia Tech researcher Xing Xie. “This simulation method will also be applied in our future study for cell performance optimisation and scaling up.”

As well as zinc-iodide, the technology is also applicable to zinc-bromide, quinone-bromide and vanadium chemistries, said the team, although zinc iodide was the most energy-dense.

“With zinc-iodide chemistry, the battery could run for more than 220 hours, or to >2,500 cycles at off-peak conditions,” according to the university. “The sub-mm bundled microtubular cells could also be applied to different energy storage systems like electrolysis and fuel cells.”