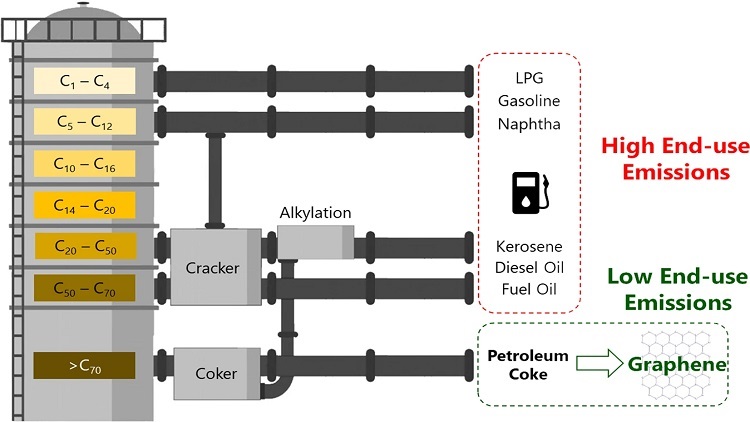 Simplified schematic of refinery operations and products. There is a need to push these petroleum streams toward products with low end-use emissions, such as carbon nanomaterials. Source: Sanjit Saha et al.

Petroleum coke, a byproduct of oil refining, can be converted into graphene, a carbon nanomaterial increasingly deployed in the engineering of batteries, supercapacitors and structural materials. The repurposing process demonstrated by researchers from Texas A&M University and ExxonMobil is based on electrochemical exfoliation to yield graphene nanosheets.

The researchers tested solid petroleum coke in an electrolyte solution with a working electrode and a counter electrode. As voltage is applied to the working electrode, the ionic species or negative ions from the electrolyte intercalate, or migrate, between layers of parent material to form graphene nanosheets. When the coke is expanded, the graphene separates and negative ions move into the spaces between the graphene sheets, completing the coke byproduct and graphene separation.

This electrochemical path to graphene from an industry by-product is described in NPJ 2D Materials and Applications.