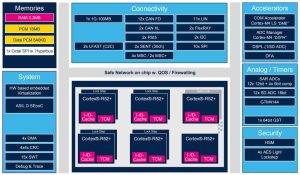 P6 MCUs will have up to six Arm Cortex R52 processor cores, some operating in lock-step and some in split-lock for fail-safe redundancy. Over-the-air updates are supported.

For safety and security, hardware virtualisation is provided to isolate the various software packages intended to run on the cores.

Alongside these, two P7 processors have appeared in ST’s pipeline – in the same choice of packaging, each has six Cortex-R52+ cores, nearly four times the ram, and more non-volatile memory.

Manufactured in ST’s own 28nm FD-SOI technology, which offers some inherent protection against radiation, P6 devices have up to 20Mbyte of non-volatile phase-change memory – rather than flash. “Developed and tested according to automotive requirements for high-temperature operation, radiation hardening and data retention, ST’s phase-change memory also delivers faster access time through single-bit overwrite, a feature unavailable in flash,” said ST.

Over-the-air updates can be made without down-time, added ST, using a memory-saving mechanism that dynamically allocates space to the new software image until it is validated – while the rest of the memory continues to execute the current real-time application.

Domain (or zone) architectures group the functions of multiple electronic control units into fewer control units. This can mean that software from multiple sources, not originally intended to be run alongside other software, need to be consolidation onto one processor.