Over the last few years, smart home devices have developed from a niche application to a ubiquitous part of household life. ABI Research found that around 70% of North American households had at least one smart home device in 2021 with strong continued growth projected (Figure 1). 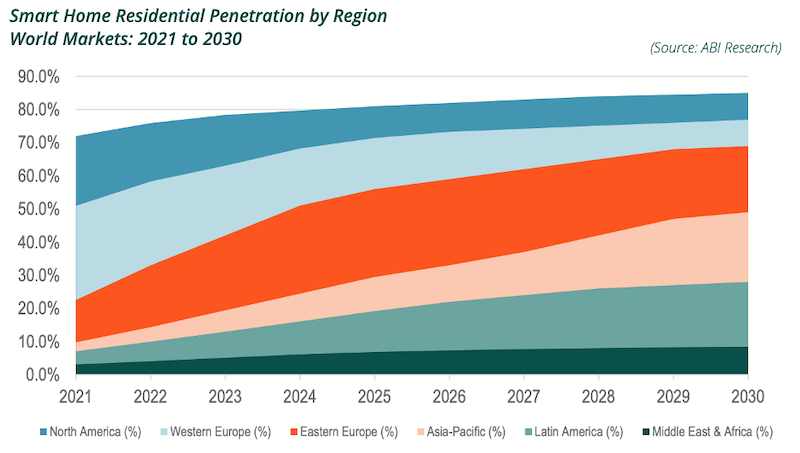 While the expected trend through 2030 estimates a relatively small growth of 10% in the North American smart home market, other regions such as Eastern Europe have much higher projected potential.

The widespread availability of fast wireless Internet access made it easy for consumers to connect devices to their home network. More capable, efficient, and cost-effective processing hardware can also allow manufacturers to build smaller, more intuitive, more powerful, and more energy-efficient devices than ever before.

Matter, a single IP-based standard, helps manufacturers of smart-home devices and customers by securely and robustly unifying different ecosystems currently available. For this purpose, Matter leverages various modern, standard communication protocols to guarantee security, compatibility, and ease of use throughout the entire lifecycle of an Internet of Things (IoT) smart-home device.

Fragmentation in the Smart Home Ecosystem

While connecting devices to their home router might be a well-understood process for consumers, choosing the right type of smart home device might pose a challenge. This challenge can be especially true as most smart home devices are not always cross-compatible between manufacturers and across ecosystems or platforms. In the end, consumers have to pick one ecosystem or platform and limit their choices or invest significant development, sourcing, and maintenance costs to attempt to support them all.

Dealing with multiple protocols and connectivity options also adds unnecessary complexity that engineers must overcome while designing a product. These limitations make it more difficult, expensive, and time-consuming to achieve a secure, reliable, and cost-effective solution let alone one that provides necessary future-proofing to remain relevant as technologies evolve.

While the number of smart home devices has grown significantly, challenges around interoperability, reliability, and security prevent widespread adoption. Additionally, they often fail to truly deliver on the promise of a smart home—convenience, security, and improved quality of life.

To overcome the hurdles caused by smart home ecosystem fragmentation, Amazon, Apple, Google, Samsung SmartThings, and a group of board members of the Connectivity Standards Alliance launched the Matter standard. Board members include Comcast, IKEA, NXP, and more.

Matter is an open wireless connectivity protocol standard that creates a local network for direct device-to-device communications enabling more responsive and reliable devices compared to devices communicating via the cloud. This protocol includes a robust certification program to ensure interoperability and compatibility between devices implementing the Matter specification.

For manufacturers, Matter will maintain a software development kit (SDK) containing implementations they can leverage in developing Matter-compliant products. These standard implementations could significantly reduce the cost and time to market for product development. They can also help ensure uniformity across crucial parts of an application, such as security implementations.

Smart home infrastructure is only as good as the connectivity options it supports. Ideally, the technology and protocols in use should support:

Targeted ICs and unifying standards such as Matter can help address the demands and requirements of efficient yet powerful connectivity solutions for the smart home sector. Silicon vendors, device manufacturers, and ecosystem providers collaborate to develop connectivity standards like Matter. Additionally, Matter leverages and supports existing standards such as Wi-Fi and Thread for network communication and Bluetooth LE for provisioning devices to a network. Device manufacturers can support one or multiple communication methods depending on the specific requirements of an application.

Wi-Fi is widely available in almost all households and offices and connecting a Wi-Fi-enabled device to an existing network is a well-understood task. Wi-Fi enables high-bandwidth applications such as video/audio streaming and voice communication and provides a bridge to cloud connectivity. Matter is the first standardized application layer for Wi-Fi.

Matter also includes support for Thread, a secure, reliable, and energy-efficient mesh networking protocol that uses the Internet’s proven, open standards to create an Internet Protocol version 6 (IPv6) based mesh network. Mesh networks typically require a dedicated gateway or hub to interface between the home and the Internet. However, as an IP-based protocol, Thread eliminates this limitation. 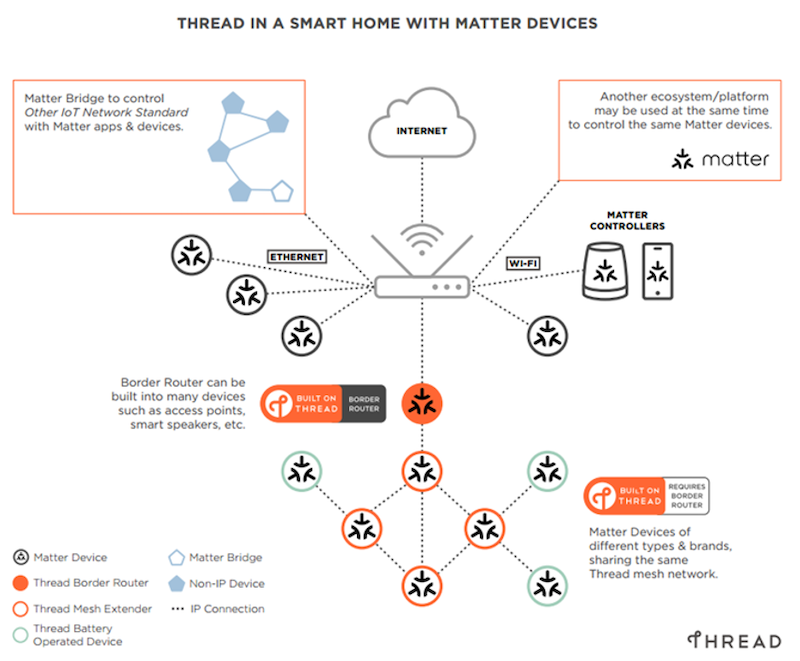 Figure 2. This diagram illustrates a Thread mesh network as part of a Matter Smart Home network topology. It contains a Thread Border Router which connects the Thread mesh network to a home network and subsequently to the Internet, several Thread Mesh Extenders, and three battery-operated Thread End Devices. Image used courtesy of the Thread Group.

A Thread Border Router, embedded in a range of mains-powered devices like smart speakers or access points, securely and transparently connects Thread networks to other IP networks such as Wi-Fi or Ethernet.

Just like an access point does for Wi-Fi, a Thread Border Router from any brand can connect all Thread devices to a user’s network, eliminating the need for proprietary hubs or bridges.

Thread Mesh Extenders forward packets to other devices within the mesh network and extend the network to far corners of homes and buildings. These networks expand automatically as more devices are added to build a stronger, more reliable network. Additionally, Thread end devices connect to the mesh network but don’t forward packages to other devices, which allows them to remain in a powered down mode and wake up periodically for messages from their parent device (mesh extender) to enable years of battery life.

A Thread network is self-forming, self-managing and self-healing with no single point of failure making it robust, resilient, and simple to use.

Therefore, Matter leverages Thread as a low-power IPv6 communication channel for low-data-bandwidth applications, for example, battery-operated IoT sensors. Due to its nature, a Thread-based mesh network allows for easy addition and removal of end devices, which benefits customers. Line-powered Thread border routers allow the Thread network to connect to other IP networks.

Matter aims to make connectivity simple, secure, reliable, and seamless. Below are four fundamental benefits of Matter to ensure that all compatible devices will be interoperable and give end-users a plug-and-play-like experience.

1. Uses IPv6 as a Basis for Connectivity

Using IPv6 as a basis for connectivity enables Matter to build upon tested and proven IP-based networks that are already widely available today. Additionally, IPv6 enables Matter to utilize multiple network interfaces at the network layer without the need for higher-layer software.

2. Defines a Uniform Framework and Model for Smart Home Infrastructure

Matter creates a clear set of definitions describing what a device is and its standard set of parameters. This uniform description allows compatible devices to communicate with each other regardless of the manufacturer. Matter also defines the process for onboarding devices to a network and maintaining support for deployed devices through over-the-air software updates.

3. Builds Upon an Existing Foundation of Market-proven Security Algorithms

By leveraging the Internet Protocol, Matter can build upon a solid existing foundation of market-proven security algorithms and infrastructure that can handle routing, switching, and firewalling tasks as well as end-to-end security. You can see an example in Figure 3. 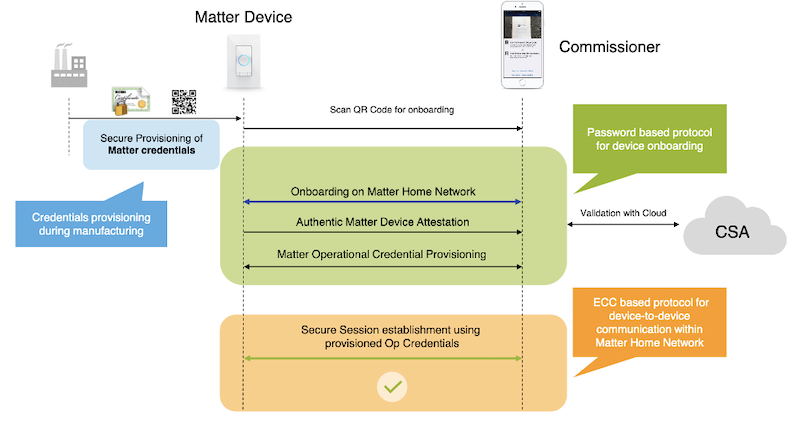 Figure 3. In this example, a user scans the QR code of a matter-compatible device using their smartphone. Once an additional cloud-authentication step is successful, the device becomes part of the Matter network and it can communicate with other participating devices securely. Image used courtesy of NXP.

While these ideas are not new to the smart home sphere, Matter aims to create a uniform, secure basis that all manufacturers can follow. Matter authenticates devices before onboarding them to the Matter network to ensure that joining devices are who they say they are and have the authorization to join the network. Matter also maintains secure connections, protects every message, and enables secure over-the-air updates. As an open-source standard, there is transparency in the developer community.

4. Focuses on Simplicity and Reliability

Consumers should not have to care about how a device works or whether it is compatible with their existing smart home infrastructure. Instead, smart home devices should deliver a plug-and-play experience that lets all customers enjoy the benefits of a connected home without having to worry about technicalities. Consumers also shouldn’t have to replace their existing smart home devices. Matter addresses this by including support for bridge devices, and many manufacturers have already announced that they will include Matter support for their existing products via a Matter-compatible firmware update or added bridge device.

Matter creates a common ground for smart home devices that manufacturers can build on. Doing so not only benefits consumers looking to add new devices to their existing home network, but also helps product developers and manufacturers.

Developers won’t have to support numerous proprietary protocols to ensure that their devices work in several smart home ecosystems. With Matter, they can focus on product innovation.

Enabling Matter for a Range of Smart Devices

The variety of smart devices that Matter is designed for covers a range of requirements from how they connect to other devices to the level of features they provide to users. Processing, security, and connectivity are key building blocks for building these smart devices. Silicon manufacturers provide these building blocks as a combination of hardware and software.

NXP is one of the semiconductor companies supporting Matter and is uniquely positioned to provide the complete set of building blocks. For example, the NXP K32W061/41 series of wireless MCUs support Matter with Thread and Bluetooth LE providing a single-chip standalone solution for Thread-based Matter sensors, actuators, and other simple devices.

For more complex devices, such as those with multiple networks and rich user interfaces, the K32W061/41 can be paired with an RTOS or Linux-based host such as the i.MX RT1060 or i.MX 8M Mini. Also, NXP has deep security expertise and solutions–including dedicated secure elements, embedded secure capabilities within the microcontroller and microprocessor portfolios as well as trust provisioning services.

NXP is also leading the way for further integration. The combination of Wi-Fi and Bluetooth has become a de-facto standard in connectivity solutions for IoT applications. NXP’s IW612, which is the first of a family of monolithic tri-radio devices, goes beyond this by combining all three connectivity standards that enable Matter. Below, in Figure 4, you can see a block diagram of this solution. 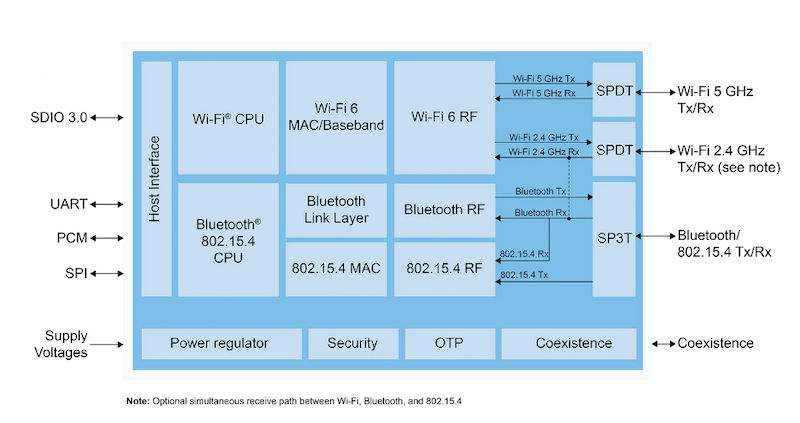 Figure 4. The internal block diagram of the NXP IW612. Image courtesy of NXP.

Using only a single chip, engineers can enhance their Matter applications with Wi-Fi 6, 802.15.4 (Thread), and Bluetooth 5.2 support. In addition, the IW612 incorporates advanced IoT security features, such as secure boot and firmware updates, key generation and lifecycle management, and hardware encryption supporting the latest cryptographic algorithms.

Combining the three communication methods described in the Matter standard and the necessary security features that go along with it in a single IC package helps engineers design smaller, more efficient devices. Fewer external components are needed, which results in a lower-complexity design and faster time-to-market.

However, the real power of highly integrated tri-radio solutions, such as the IW612, stems from the fact that it was designed to work in regular devices. The IW612 can be added to practically any everyday smart device, for example, smart speakers, connected thermostats, and intelligent kitchen appliances. Such devices are already common in many homes and offices today. However, by incorporating a tri-radio solution instead of only Wi-Fi and BLE, companies and customers can quietly and consistently build a Matter network in a highly cost-effective and simplistic way when replacing their old devices. Furthermore, the advanced coexistence capabilities of the IW612 are essential for Matter control devices that ultimately allow the Matter protocol to run over any smart home device that supports only Thread, Wi-Fi, or Ethernet.

For more information on Matter and picking a connectivity solution for your application, visit NXP.