One of the limiting factors in the budding metaverse is display technology. Currently, there are many different approaches to creating comfortable, immersive displays, but no company has designed a technology that has pushed extended reality (XR) or augmented/virtual reality (AR/VR) to widespread adoption.

This week, in an attempt to create a more immersive metaverse experience, imec-spinoff company Swave raised $7.3 million in support of its Holographic eXtended Reality (HXR) technology. In this article, we’ll look at some of the popular forms of AR/VR display technologies and Swave’s holographic chip approach to extended reality displays.

Regarding augmented reality (AR) displays, there are a number of competing architectures in the market today.

Generally, an AR display consists of two key ingredients: a light engine, which serves as the image source, and an optical combiner, which directs the displayed image to the viewer’s eye. For the light engine, there are several different types of display technologies that have been used in AR. Some of the most popular include micro-LED, micro-organic LED, liquid crystal-on-silicon (LCoS), laser beam scanning (LBS), and micro-electromechanical (MEMS). 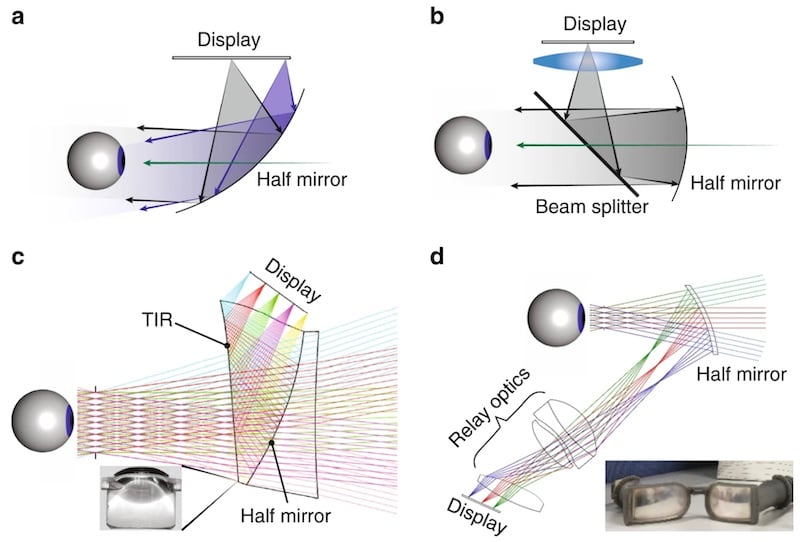 There are a number of combiner technologies being used today. Image used courtesy of Xiong et al

The same diversity applies to combiner technology. Combiners can be either “free space,” meaning light is freely propagating in space, or “waveguide,” where a physical waveguide directs light to the viewer.

Swave, a company that has spun out of both imec and Vrije Universiteit Brussel (VUB), claims to be taking a different approach to extended reality displays than most.

Most information about Swave’s technology is not public, but what we do know is that the company is developing a line of holographic display technology called Holographic eXtended Reality (HXR) technology. Swave’s offerings include a series of microchip products ranging from 0.5 cm x 0.5 cm to 2 cm x 2 cm that leverage “advances in photonics and holography based on diffractive optics” to target graphics for metaverse applications.

With this technology, Swave claims to take a 2D hologram on a chip and fully reconstruct a 3D light wave of the scene in all directions. To do this, Swave’s microchips generate sub ½ wavelength pixels, sized below 220nm, which is anywhere from 250 to 2000 times smaller than pixels from other technologies. The result is extremely high-resolution displays. Swave intends to manufacture its HXR chips with standard CMOS technology to affordably ramp up its scaling efforts. 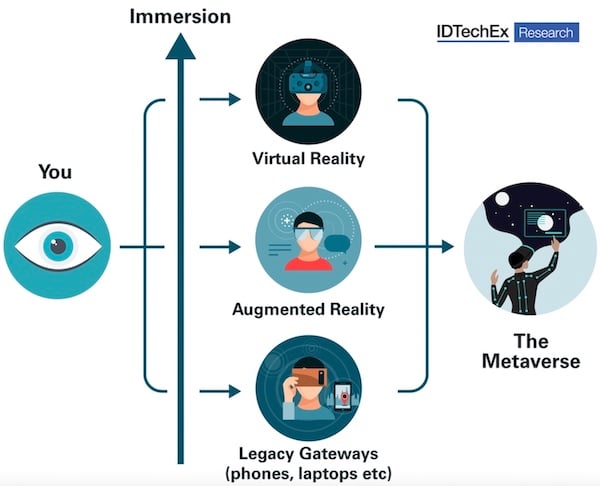 Depiction of the metaverse. Image used courtesy of IDTechEx Research

Uniquely, Swave is not tailoring its technology for wearable displays like AR/VR glasses. Instead, the company says its technology can provide high-resolution, immersive 3D displays without the need for a headset at all. Swave asserts that by removing the headset requirement, it bypasses a number of common challenges with AR/VR/XR, like eye tracking and focal depth. With Swave’s HXR technology—claimed to project “lifelike holographic images”—viewers can focus on objects near and far.

Swave Intends to Expand the Metaverse

This week, Swave announced that it had raised a $7.3 million seed round. Leading this funding round are imec-xpand and Flanders Future Techfund (FFTF) with additional support from QBIC, a Belgian inter-university venture capital fund.

According to Swave, the investment will be used to fuel the commercialization of its product, which has been under R&D for more than five years. While no product has reached the market yet, Swave plans to release initial samples of the HXR chip in 2023. The large versions of Swave’s HXR microchip (2 cm x 2 cm) are intended for high-end holographic displays while the smaller versions (0.5 cm x 0.5 cm) are designed for lightweight wearables.

Swave claims its HXR gigapixel technology will improve a number of applications within the metaverse while opening doors to others. These may include:

While the new HXR chips can be used for traditional AR/VR/XR glasses, they may one day enable holographic headsets for a 3D experience with 180-degree to 360-degree viewing angles, Swave states on its website.