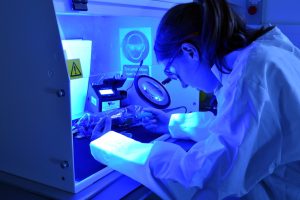 It promises a more data-driven approach to design and manufacturing, says the company. The goal is to speed up development and cut costs for engineers researching and building technology such as radars and protective countermeasures for aircraft.

“For the first time ever, all of our scientists and engineers can look at the same data held in the same place at the same time,” said Gareth Hetheridge, UK IT Director at Leonardo.

“It immediately cuts away all those circuitous routes you normally have to go through to access information. We want to free up headspace and time for our people to do what’s really important: think, invent and solve problems.”

The common data environment will underpin Leonardo’s broader programme of digital transformation across its UK-based business, it says.

The idea is to securely capture the massive quantities of data being generated across the organisation on a daily basis in one place. This will be accessible to employees via a range of tools, including a “data science workbench”.

Apparently, in early trials of the system, an analysis task that took four hours could be performed in 30 seconds. Elsewhere, a radar test cycle was reduced from several days to just a few hours.

“We started working on this project in January this year and we managed to get data into the hands of our first users by April – that’s an incredible feat when you think about the technology we put in place to connect everyone,” added Hetheridge.

“Our users previously had to look in several different places for the data and now we’ve given them a whole new experience – it’s like the difference between trying to find something in the dark with candlelight and then someone turns on a light switch. Suddenly you see the whole picture.”