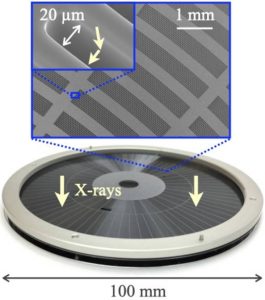 The lenses exploit the nature of x-rays, which can reflect if they approach a flat surface almost parallel to it, at a slight glancing angle.

The Tokyo x-ray lens is machined from a 100mm silicon wafer using reactive ion etching to produce circular slots 20μm wide (see diagram) that pass all the way through the wafer – the x-rays bounce from the sidewalls of these slots.

Sidewalls smoothness affects the quality of reflection, with roughness needing to be lower than around 1nm for total reflection, according to the Tokyo researchers.

Here they turned to hydrogen annealing, which is known to tame rough silicon surfaces by encouraging migration amongst the atoms. 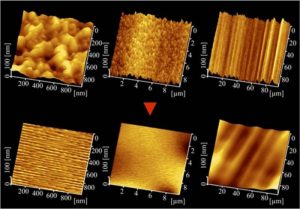 They annealed the machined wafer for 150 hours, testing it along the way.

As the process also rounds the edges of the slots, the wafer surfaces were then polished to establish crisp edges, leaving the wafer 300μm thick.

To make a lens (with ‘Wolter I’ geometry), two such wafers were made, and then hot-deformed into slightly domed shapes, one with a 1m radius of curvature and the other more tightly curved at 333mm radius.

Before assembly, the wafers were coated with a thin layer of platinum to improve reflectivity.

The final two-wafer assembly weighs 15g, suiting it to 50kg satellites according to a paper which describes the work: ‘Improvement of imaging performance of silicon micropore X-ray optics by ultra long-term annealing‘, published in Optics Express, and available in full without payment.