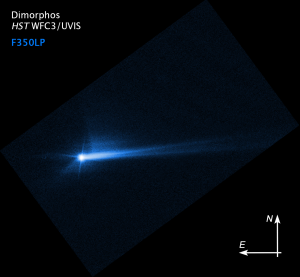 We previously reported that a collision had taken place, but now Nasa has confirmed that the moonlet selected for impact has been affected in its course. 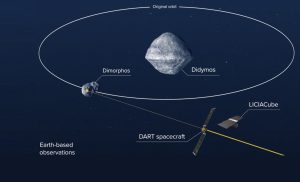 “This mission shows that NASA is trying to be ready for whatever the universe throws at us,” said NASA Administrator Bill Nelson. “NASA has proven we are serious as a defender of the planet. This is a watershed moment for planetary defense and all of humanity, demonstrating commitment from NASA’s exceptional team and partners from around the world.”

Pictured above is the imagery taken from the Hubble Space Telescope on 8 October 2022. It shows the debris blasted from the surface of the asteroid hours after the it was hit by NASA’s DART spacecraft (on 26 September).

Nasa says the shape of that tail has changed over time and scientists are studying this material and how it moves in space, in order to better understand the asteroid.

Pictured below is the one of the final images taken before DART’s impact, more of which can be viewed here. 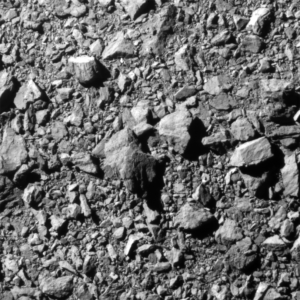 The body chosen for impact was a moonlet, called Dimorphos 285, which measures 160 meters in diameter and is described as about the size of the Great Pyramid of Giza. It orbits a larger, 780-meter asteroid called Didymos, neither of which pose any threat to Earth .

The kamikaze spacecraft had one instrument – the Didymos Reconnaissance and Asteroid Camera for Optical navigation (DRACO) – and used a navigation and control system that works in tandem with Small-body Maneuvering Autonomous Real Time Navigation (SMART Nav) algorithms. This, said Nasa previously, would enable DART to identify and distinguish between two asteroids and target the smaller one.

Before the impact, a CubeSat – the Light Italian CubeSat for Imaging of Asteroids (LICIACube), provided by the Italian Space Agency – deployed from the spacecraft to capture images of the impact and cloud of ejected matter.

Along with the images returned by DRACO, said Nasa, LICIACube’s images will help researchers better characterize the effectiveness of kinetic impact in deflecting an asteroid.

You can read more about the DART mission on the NASA website.

The next step involves ESA’s Hera mission, in two years’ time, seeing the Hera spacecraft voyage to Didymos and Dimorphos. This is due return to the double asteroid system to further investigate the impact and gather more data to help turn the experiment into repeatable technique.

“The next mission to fly to the Didymos system is going to be the Hera mission, planned by ESA, a multinational endeavour to go back to the system and get a chance to look at it again a little later on,” said Lori Glaze, Director of NASA’s Planetary Science Division.

Hera’s payload module is being built at OHB in Germany, with its propulsion module being prepared at Avio in Italy, says the ESA. The spacecraft will apparently also carry two shoebox-sized CubeSats for close-up observations.