In a previous article, we discussed the basics of the IEPE accelerometers. In this article, we’ll look at the diagram of a typical power unit that can be used to supply power to an IEPE sensor. We’ll also look at the advantages and limitations of the IEPE type and charge output sensors.

Figure 1 shows the basic diagram of a power unit that can be used with IEPE sensors.

Figure 2. A schematic of a CRD.

While a majority of the IEPE sensors can be powered by a 2 to 4 mA current source, currents as large as 20 mA are required in some cases. The maximum current rating of CRDs is typically 4 mA. For larger currents, either several CRDs are used in parallel, or a high capacity constant current circuit is used instead.

Note that a power supply that doesn’t have current limiting functionality should not be used to power an IEPE sensor or the sensor will be immediately destroyed.

The IEPE power units normally have a voltmeter that monitors the sensor bias voltage and informs the user of the system status (a short, open, or normal operating condition). Keep in mind that, with an IEPE sensor, both the output signal and the supply voltage are carried through a two-wire connection.

As shown in Figure 1, many IEPE power units use a coupling capacitor to separate the signal from the DC bias voltage. There are also power units that use DC coupling to avoid reducing the discharge time constant of the system.

As shown in Figure 3, there are two options for powering an IEPE sensor. Some readout instruments have built-in constant current power supplies specifically designed for IEPE sensors. If the readout device doesn’t include an IEPE power supply, a separate power unit should be employed, as shown in the Figure. 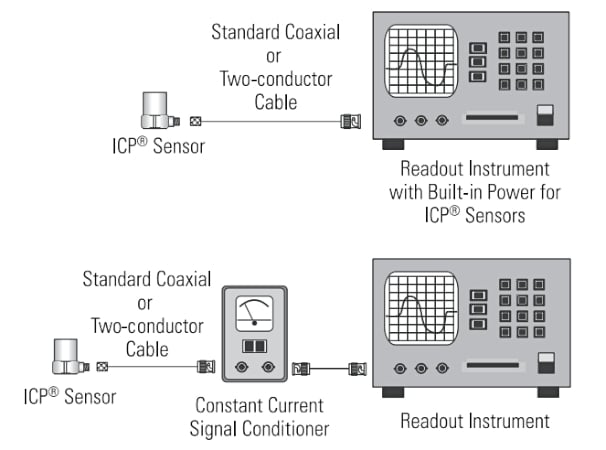 An example readout device that supports IEPE sensors is shown in Figure 4.

Figure 4 shows the NI 9234, which is a four-channel signal acquisition module with software selectable IEPE signal conditioning. As the input circuit diagram shows, the device has a 2 mA constant current power supply and an AC coupling option.

Figure 5 shows a typical measurement system based on a charge output sensor, i.e., a piezoelectric sensor that doesn’t have an integral pre-amplifier.

Most applications today use the IEPE type; however, the charge output sensor has its own advantages. Below, we’ll assess the pros and cons of each method.

The built-in electronics of an IEPE sensor place an upper limit on the operating temperature range of the system. With standard electronics, the maximum temperature is typically about 125˚C. Using special electronic components can push the upper limit to about 165˚C.

Furthermore, the IEPE type accelerometers can be popular in the general-purpose testing market, while charge output piezoelectric accelerometers dominate applications where temperatures above about 150˚C are involved. 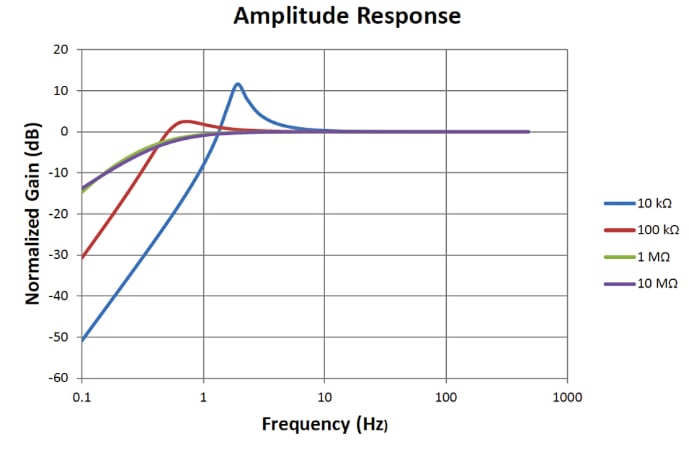 Figure 6. A graph of the frequency response of a charge amplifier with a low resistance sensor. Image used courtesy of Endevco

Charge output sensors require specially treated cables to minimize triboelectric noise. The triboelectric noise refers to the unwanted electric charge produced by rubbing two dissimilar materials together. Flexing or vibration of the cable can cause triboelectric noise. The high impedance output of a non-IEPE sensor can be corrupted by this type of noise and therefore, special low-noise cables are required between the charge output sensor and the charge amplifier. These cables are generally more expensive than standard cables and increase the cost of the non-IEPE system.

Moreover, the high-impedance output of a charge output sensor has limited line driving capability, limiting the cable length between the sensor and charge amplifier to below about 10 meters. On the other hand, standard coaxial cables can be used to transmit the low-impedance output of an IEPE sensor over relatively longer distances without significantly increasing the noise level.

With IEPE sensors, the sensor parameters, such as sensitivity and time constant, are fixed at the time of manufacture. We can use external circuits to amplify or attenuate the sensor output but we cannot change the sensitivity or time constant of the sensor. On the other hand, the signal produced by a charge output sensor is processed by an external charge amplifier which can provide us with more flexibility in adjusting parameters such as the system time constant. Special types of charge amplifiers can provide us with very long time constants, extending the low-frequency response of the system.

The IEPE sensors can be operated using relatively cost-effective signal conditioners. Some readout instruments have built-in IEPE power units and can directly connect to an IEPE sensor. If the readout instrument doesn’t have a built-in power unit, we can use an external power unit, as illustrated in Figure 3. On the other hand, with charge output sensors, we need an external charge amplifier. Although laboratory-type charge amplifiers have many helpful features, they are much more expensive than a simple IEPE power unit.

With IEPE sensors, the high impedance signals are placed inside a sealed rugged construction. This makes IEPE sensors less sensitive to harsh conditions such as dirt and humidity.