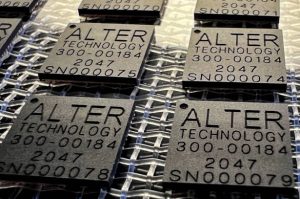 “We have set up the UK’s only QFN plastic package semiconductor line, which has a capacity of several million single die QFN-equivalents per year, with plans to go beyond 10 million next year,” said company CEO Stephen Duffy. “While still a long way off the capacity of the big OSATs, we believe that such volume capability will be vital to ensuring a vibrant UK and European semiconductor industry in future years.” (OSAT is ‘out-sourced assembly and test’).

According to the company, it has a niche in which it can package die for industrial, medical, aerospace and defence markets, and for chip companies working in gallium nitride and silicon carbide, as high-volume OSATs predominantly concentrate on consumer, mobile and automotive markets, and are prone to reject small batches and non-standard requirements.

Under its Driving The Electric Revolution Challenge, Innovate UK funded Alter to development a plastic package for a silicon carbide power device. The project also included Turbo Power Systems, Clas-SiC Wafer Fab and the Compound Semiconductor Catapult. “The European Space Agency has awarded a contract to Alter Technology UK to evaluate these plastic packages for use in space grade environments,” said Alter.

Known as Optocap until the end of 2019, Alrer Technology UK is part of German technical services company TÜV Nord. It’s UK base is on the Kirkton Campus, and it also makes lasers.