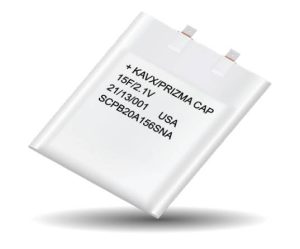 Kyocera AVX has introduced a series of pouch-style supercapacitors for decreasing current surges in batteries.

Called the SCP Series and branded PrizmaCap, they “can be used on their own as system power backup devices, replacing batteries in some cases, or they can be used in conjunction with primary or secondary batteries”, according to distributor Anglia, which is stocking the parts. “Using them in conjunction with a battery allows for extended system back-up time, improved battery life, and allows provision of instantaneous power pulses.”

The idea is that a low-impedance supercapacitor is connected in parallel with the battery and handles high current pulses, allowing the associated battery to be sized for average rather than peak load or charge.

Smoothing current peaks during transmit bursts in wireless transceivers is one potential application, as is supplying current through motor drive torque peaks.

“PrizmaCap has an inherent low ESR which allows it to deliver large peak currents, up to 8.63A on the 15F model, and they are capable of fast charge-discharge cycles. Furthermore, their number of charge/discharge cycles far exceeds that of battery technology with more than 500,000 cycles achievable under specified conditions,” said the distributor. They are “RoHS- and REACH-compliant, lead-free compatible and currently made in the USA. Kyocera AVX has qualified the supercapacitors for life cycle, high-temperature load, temperature, vibration and humidity”.

On the subject of lifetime, MTBF can be decades, but is dramatically temperature dependant and can also be months – the data sheet (liked below) has a graph on page 7.

Custom SCP capacitors are possible, with negotiable footprints and capacitance between 1F and 500F.

Electronics Weekly has asked Anglia how this voltage range should be matched to common battery types – watch this space.

Inside, they are based on propylene carbonate electrolyte, used already in lithium-ion batteries.

Termination is through a pair of flat surface-mount tags which have to be hand-soldered, or they can be slipped into Kyocera’s 70-9159 Series ‘Stript’ low-profile non-insulate surface-mount terminals – originally intended for LED lighting – which can be reflow soldered and can handle 20A.

and the Kyocera AVX SCP data sheet is here