Qualcomm and Partners Send 5G Out of This World – News

With this in mind, several industry leaders are now teaming up, intending to bring 5G to every corner of the earth. 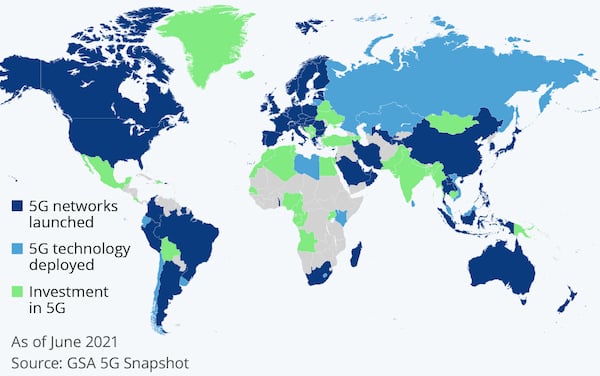 A map showing the reach of 5G globally as of 2021. Image [modified] used courtesy of Statista

This week, Qualcomm announced a collaboration with Ericsson and Thales to begin testing of 5G non-terrestrial network (5G NTN).

In this article, we’ll look at 5G NTN, its benefits, and the collaboration between Qualcomm, Ericsson, and Thales.

5G NTN—The How and What

While the use of 5G networks to facilitate smartphone communications is ramping up significantly, this is not the only application of 5G. 5G extends the possibilities of wireless communication, specifically opening up the door for unprecedented forms of machine-to-machine communications and applications like IoT.

However, to fully reap the potential of this technology, we need service expanded into non-traditional areas to ensure a degree of service continuity. To do this, many are looking to 5G NTN as the answer.

On a higher level, non-terrestrial networks define any network that involves non-terrestrial objects (i.e., objects that are flying). One of the most prominent forms of NTN is satellite-based communications. Here, satellites operate in either geostationary, medium, or low earth orbit and work to provide 5G data transport in rural areas collectively.

Effectively the satellites in an NTN act as a 5G RAN node in a hybrid satellite-terrestrial network with the potential to provide front-haul and back-haul services.

On a lower level, the architecture for a 5G NTN, as outlined in 3GPP TR 38.821, includes these satellites receiving the electromagnetic (EM) wave transmitted from the isolated location on earth and converting those waves into purely electrical signals.

These signals then get filtered, amplified, frequency-converted, and put through a high-power amplifier. Finally, the signal is transmitted to receiver base stations elsewhere on earth.

Qualcomm, Ericsson, and Thales Team Up

This week, Qualcomm, Ericsson, and Thales have teamed up and are beginning testing and validation of 5G NTN.

Specifically, the companies will look at smartphone use cases within 5G NTN to validate the various technology components needed to enable 5G NTN, such as smartphones, satellite payloads, and 5G ground stations. Within this, each company will look to a specific part of the 5G NTN architecture to test and validate its feasibility.

From Ericsson’s perspective, it will aim to verify a 5G virtual RAN stack, which has been modified for dealing with signals propagating via low-earth orbit (LEO) satellites.

Thales, on the other hand, will be using this testing as an opportunity to verify a 5G radio satellite payload that is suitable for deployment on LEO satellites.

Potential Implications for the Future

According to the three companies, if the testing comes back positive, 5G NTN could be a key solution to offering complete coverage all over the globe, including extreme geographies or remote areas where terrestrial communication is absent. Beyond that, the team claims that 5G NTN could have the benefit of acting as a backup for terrestrial networks in the event of major outages or natural disasters.

For the time being, the expected main use case of 5G NTN will be national government communications, where security and reliability are paramount.