Raspberry Pi puts Wi-Fi onto Pico for $6, and maybe Bluetooth 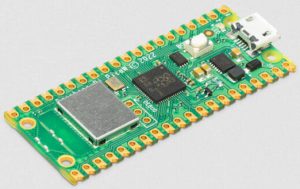 Pico W, as it will be known, is just the same size as the original Pico (~ 21 x 51mm) – which was recently qualified for operation across -40 to +85°C for industrial users – and has the same pin-out.

Wireless interfacing comes via an Infineon CYW43439 chip. “Like all modern Raspberry Pi boards, the radio circuitry is encapsulated in a metal shield can, reducing compliance costs for customers who want to integrate it into their own products,” said Raspberry Pi Trading. “CYW43439 supports both Bluetooth Classic and Bluetooth Low-Energy – we have not enabled Bluetooth on Pico W at launch, but may do so in the future.”

At the same time, the organisation launched with-soldered-header versions of Pico and Pico W: Pico H ($5) and Pico WH ($7). Pico H and Pico W are available today. Pico WH is scheduled for August. 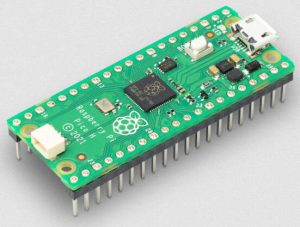 “The network stack is built around lwIP, and uses libcyw43 from Damien George – of MicroPython fame – to communicate with the wireless chip,” said Raspberry Pi. “By default, libcyw43 is licensed for non-commercial use, but Pico W users, and anyone else who builds their product around RP2040 and CYW43439, benefit from a free commercial-use license.”

MicroPython users can download a UF2 image with networking support for Pico W. This is a separate build to the existing Pico MicroPython firmware – there will continue to be two distinct UF2 firmware releases, one for Pico and one for Pico W, according to the organisation.

There is on-line help for C and MicroPython, including API level documentation. “Over the next month or two we’ll be rolling out more demos and documentation,” said Raspberry Pi.

Pico and Pico W are based on Raspberry Pi’s RP2040 microcontroller. It has dual 133MHz Arm Cortex-M0+ cores and 264kbyte of on-chip ram, but no on-chip flash – instead it connects with off-chip flash through a QSPI serial bus.

Raspberry Pi Trading is promoting RP2040 and Pico for industrial use, and was giving away free Picos at Embedded World last week, emphasising that there is no chip shortage for RP2040.