Sensors Up Their Game in Proximity and Position Detection – News

The Sensors Converge 2022 show last week was overflowing with interesting sensor innovations. The All About Circuits team was there to take it all in first hand.

In this article, we focus on some of the sensor products and technologies announced at the show that focuses on position- and proximity-sensing, including products leveraging UWB.

Proximity sensing is a technology where requirements can vary depending on the application. Human presence detection, for instance, has its own particular needs. Addressing this segment, at Sensors Converge, Novelda unveiled an upgraded version of its UWB proximity sensor.

At Sensors Converge, Novelda shows a demo of their UWB proximity sensor using a mock-up of a vending machine (left). Close up of the sensor (right). Images used courtesy of Novelda

At its Sensors Converge booth, Novelda gave us a demo of its UWB proximity sensor. The demo involved walking up to a mock vending machine. When we approached the “vending machine,” the sensor flagged our presence when we moved within 1.5 meters. It could activate an LCD screen when our presence was detected, and turn it off when we stepped back out of range.

At the show, Espen Wium, chief product officer at Novelda, explained that a significant feature of the technology is that the sensor ignores anything beyond the configured range of the sensor. In other words, people walking by in the background do not trigger the sensor. This is important for applications where human presence detection needs to be within a specific zone.

In a vending machine application or any similar walk-up interface-based system, the UWB proximity sensor helps increase LCD screen lifetime and ensures an automated way to save power usage.

According to the company, engineers can configure the sensor for distance and for sensitivity. Distance settings can scale from 0.5 meters to 1.5 meters, making it well suited for indoor systems. The sensor offers a fast response with a latency time of less than 0.25 seconds for device activation or deactivation, says Novelda.

Integrating the sensor into a system design is easy, according to the company. It can be integrated behind most types of materials, such as plastic, glass, or fabric without disrupting the performance. The sensor is packaged as a tiny surface-mount technology (SMT) module (with SMT solder balls) that measures 12 mm x 12 mm, with a thickness of 2 mm.

The device does all its signal processing locally, which means that no processing is needed by an external microcontroller (MCU) once the sensor is enabled. The company claims that the module’s antenna-in-module approach further ensures simple and low-cost integration.

Novelda’s UWB proximity sensor can be controlled externally by any MCU with 8 kB flash and 1 kB RAM for programming, Sensor field of view is up to 180 degrees (horizontal, vertical). It has a 1.8 V to 3.3 V supply voltage with a power consumption of less than 20 mW.

According to Novelda, UWB sensing is ramping up in adoption. The company cites market research firm ABI Research’s prediction of 500 million shipments of UWB by the end of 2022, with growth over the next four years forecast to 1.5 billion units. Those numbers start to rival Bluetooth technology, says the company.

While UWB may be on the rise, Bluetooth is already entrenched as sensor technology. Along those lines, at Sensors Converge, Powercast and InPlay together announced a platform for designing battery-free, IoT sensor systems based on Bluetooth Low Energy (BLE) that can be used at distances up to 120 feet. At the show, the two companies each provided demos of the platform at their respective booths.

The platform uses Powercast’s RF-to-DC power harvesting technology to power InPlay’s active Bluetooth sensor IN100. The IN100 is the first of InPlay’s NanoBeacon SoC product family. According to the company, the IN100 can be integrated with nearly any system for real-time location monitoring. It can be paired with sensors to monitor conditions such as humidity, temperature, and light. 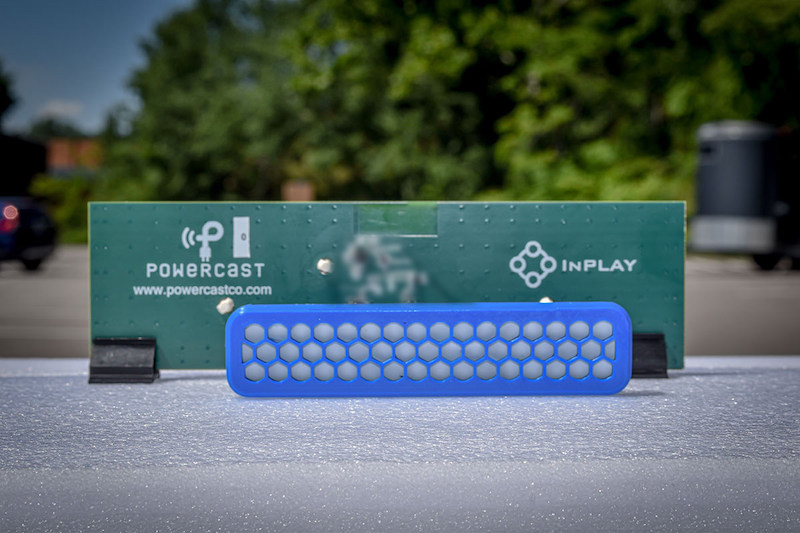 The NanoBeacon IN100 makes use of Powercast’s far-field wireless technology to power its sensors from its PowerSpot transmitter over 120 feet away. This enables a beacon signal every minute. The IN100 features fast start-up and when in data transmission mode, uses power in the microwatt range, says InPlay. As the NanoBeacon is moved farther from Powercast’s RF transmitter, the beacon signals become less frequent. Meanwhile, moving it closer increases the frequency if the application requires it.

Previous specs for the NanoBeacon documented a range of 80 feet. But the new distance achievement of 120 feet is helped by Powercast’s PCC110 Powerharvester chip and companion PCC210 boost converter. These devices work together to harvest RF out of the air, at efficiencies up to 75%.

The NanoBeacon IN100 SoC can be configured via an app and doesn’t require any programming, says InPlay. More information is available from the IN100 datasheet.

The company claims the sensors as the first to marry two technologies in a single package: vertical Hall technology (VHT) and tunneling magnetoresistance (TMR) technology.  in a single sensor package. Combining VHT and TMR offers a superior heterogeneous redundant sensor solution, according to Allegro. 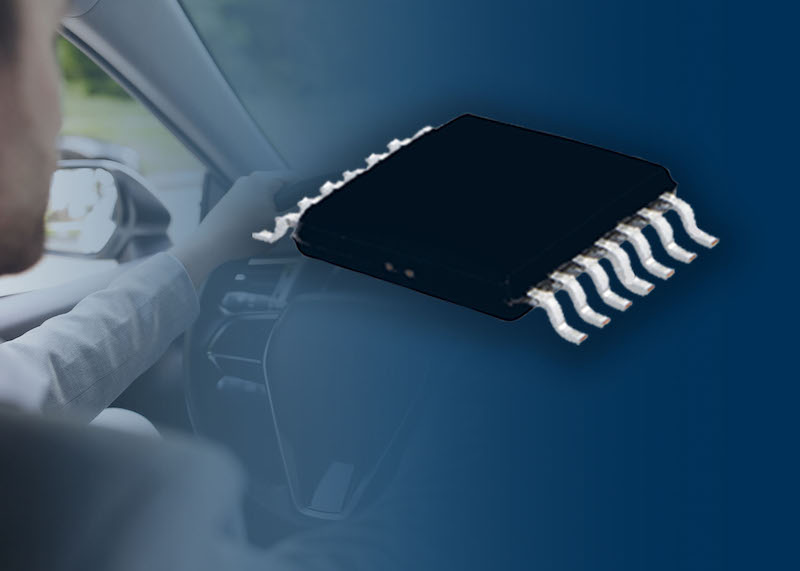 Resolution and accuracy improvement is the problem these new devices aim to solve, says the company. The stakes are high for future automated and autonomous vehicles. Such platforms require electric power steering systems with precise motor control capabilities. They also demand brake-by-wire or electromechanical braking systems with fast response time.

Today’s vehicle designs typically use giant magnetoresistance (GMR) or Hall-effect sensors. In contrast to their GMR counterparts, Allegro says its TMR-on-silicon technology serves up improved resolution and accuracy, with up to 8x greater sensitivity. Compared to traditional Hall-effect sensors, the improvement in resolution is even more dramatic, says Allegro.

Meanwhile, Allegro’s VHT used in the new A33110 and A33115 enables accurate safety checks. This includes low-field and missing-magnet detection. The new devices are ASIL D-compliant. They reduce the likelihood of dependent failures by making use of the best of both TMR technology and VHT.

Independent Channels of Processing for Safety

The A33110 and A33115 sensors provide a unique configuration whereby magnetic angle sensing is done through both the primary (TMR) and secondary (vertical Hall) transducers.  Each of those transducers is processed by two independent channels, each with independent regulators and temperature sensors.

This enables high levels of safety and diagnostic coverage, including on-chip channel-to-channel angle comparison. There is independent processing in digital signal paths, with no shared digital resources. All of this is critical for automated driving, says Allegro.

The A33110 and A33115 provide similar features, but the A33115 adds a turn counter that tracks motion in 90-degree increments, along with a low-power mode. The low power mode has a user-programmable duty cycle that reduces power consumption when the IC is in a key-off position.

Allegro says the A33110 and A33115 were developed in close collaboration with key automotive OEM and Tier 1 customers. More information is available on the datasheets for the A33110 and the A33115.

The products in this article are simply another sample of the many sensor innovations the All About Circuits saw up close at last week’s Sensors Converge show. But when it comes to position and proximity sensing technology, there’re many ways to get where you’re going, and application means everything. UWB technology, BLE, and magnetics all have their place in the spectrum of these sensor solutions.

Interested in other recent sensors news? Read on in the articles down below:

Sensor ICs Suit Up to Play in EVs, RFIDs, and the IoT