The 59th annual Design Automation Conference (DAC) is this week. DAC is the premiere event where design automation tool vendors gather to showcase their solutions. The event runs July 10-14 in San Francisco.

In this article, we will examine the problem Symphony Pro was designed to solve, dive into the details of the product, and share insights from our interview with Sumit Vishwakarma, principal product manager for Siemens EDA’s Mixed-Signal business unit.

Mixed-signal Chip Design on the Rise

It’s clear that mixed-signal chips—ICs with both analog and digital circuitry—are becoming ever more common. SoC and ASIC designers are increasingly finding the need for mixed-signal designs. Markets including IoT, communications, automove, and industrial control are all contributing to this demand. 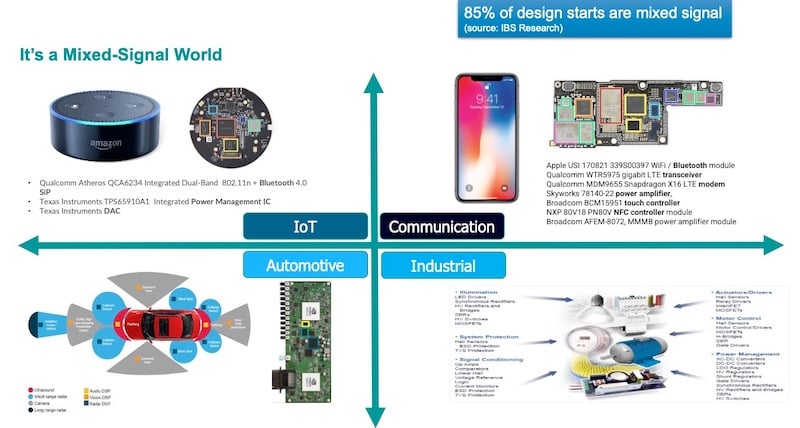 Across IoT, communications, automotive, and industrial control, engineers are doing more mixed-signal chip, with 85% of design starts being mixed signal according to IBS Research. (Click to enlarge).

Mixed-signal IC design verification is a challenging task because the simulation needed for verification has to accommodate both analog simulation and digital simulation domains. The two domains are different in many ways, says Vishwakarma. Digital devices operate with discrete values, while analog circuits operate in the continuous domain.

Furthermore, digital deals with binary states of HIGH (1) or LOW (0), while analog circuits have node voltages and branch currents that can take positive or negative values arbitrarily, he says. And, importantly, digital simulation can be done very fast—in minutes, but analog simulation is both slow and compute intensive, requiring hours or even days to complete.

When an analog signal in a mixed-signal design doesn’t operate within discrete high/low thresholds, that data point “X” needs to be captured and made available at debug time.

That allowed the simulation to take place as a 100% digital design flow and all the speed that entails. There are limitations to that in terms of accuracy. It assumes that conversions from analog to digital and back to analog are perfect, which is not the case. Vishwakarma points out that 90% of bugs in a mixed-signal design happen at the analog-to-digital boundaries.

With all that in mind, the new Symphony Pro tool adds methodologies to make sure all the important analog waveform data is collected for the simulation phase, and is available for debugging.

A key feature of Symphony Pro is its Visualizer Debug environment. Vishwakarma explains that there are three stages that make up the Visualizer’s flow. Just as any pure digital simulator would have (Siemen EDA’s Questa for example), first there is the compilation stage where you take a Verilog netlist and compile it. The second stage is optimization. That’s where the tool discards all the redundant data, keeping only the important design information for optimizing the design. 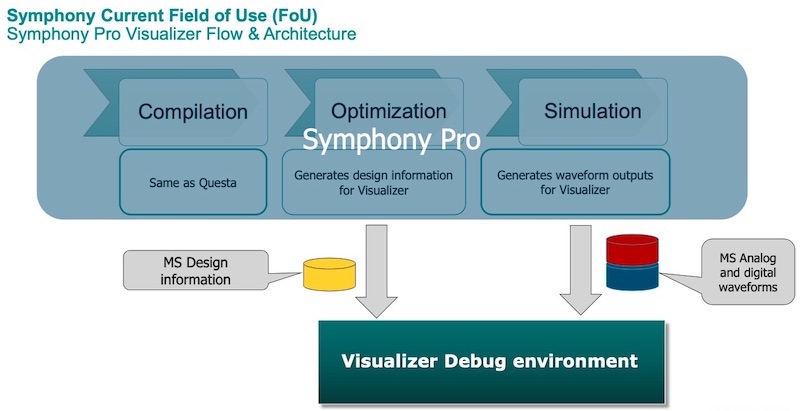 Symphony Pro creates an analog and mixed-signal database that includes all the analog and digital waveform data. This data is fed into the Visualizer MS Debug environment.

The third stage is simulation. It’s at the simulation stage that you apply the stimulus, run the simulation and generate waveforms, says Vishwakarma. At this point, Symphony Pro creates an analog and mixed-signal database. This database combines both the digital design information —Verilog and SystemVerilog for the digital blocks—as well as the analog design information with transistor-level data. The database also has all the analog waveform data.

The Visualizer MS debug tool in Symphony Pro provides several windows that let engineers analyze the mixed-signal design from different points of view. These include:

An important difference between Siemen EDA’s previous tool Symphony and Symphony Pro is that Symphony Pro can only be used with Siemens EDA simulators. In contrast, Symphony was compatible with simulators from other vendors.

A Long Journey, and an Easier Road Ahead?

If there’s any consistent trend in semiconductors is that chips just keep getting more and more highly integrated. Today, that means that analog and digital blocks living on the same IC is more common than ever. Tools like Symphony Pro are perhaps a sign that debugging and verification of these complex chips can be done with greater confidence and with greater ease.

All images are courtesy of Siemens EDA