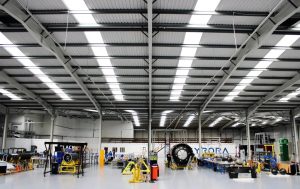 The site is expected to generate new job opportunities both in the North Lanarkshire area and in the rest of Scotland, with up to 100 high-skilled technical and business roles.

Strategically, it allows the company to progress its preparations for a UK orbital launch in custom-built domestic facilities. For example, it highlights, certain tests that would typically be outsourced to facilities in other countries can now be conducted in Scotland.

With production of two Skyrora vehicles – which feature 3D-printed engine components – already underway at the Cumbernauld site, the company plans to increase that total to 16 per year once mass production begins.

“For the very first time, the UK has an asset capable of conducting full-stage structural and pressure testing and full-stage functional and cold flow testing. Conducting these tests domestically saves significant time and costs, and represents a key advantage for UK space efforts.

As such, the maiden testing of the second stage of the Skyrora XL rocket can now be performed from UK soil, having been fully manufactured and assembled in-house. This includes the assembly of the 70kN engine, the most powerful commercially-produced liquid engine in the UK, which has been built using 3D-printed engine components.”

Pictured below is the Second Stage of its 23-metre Skyrora XL rocket. “As a business, we now have a full set of domestic facilities to allow for close control of the quality and rapid development and testing of Skyrora XL ahead of its demo launch. The site will also allow us to further optimise manufacturing processes developed by our colleagues in Ukraine and scale-up launch vehicle production in the long term, enabling further expansion and growth in the future.” 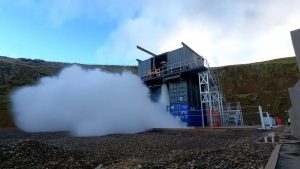 Back in March, Skyrora announced the opening of its new rocket engine testing facility in Midlothian, Scotland.

The company describes it as a state of the art facility and the UK’s largest such engine testing facility.

The site was commissioned and brought into service within six months, which was made possible by a European Space Agency (ESA) grant – awarded in 2021 – as part of its commitment to encourage new commercial space transportation services. The test stand itself took a bit longer – it was designed, manufactured and commissioned in under eight months.

By 2030, Skyrora aims to conduct 16 launches per year from Saxavord launch complex in the Shetland Islands alone, a site which has recently begun test exercises ahead of its planned rocket launches.