Food transportation operations are a major, and previously unrecognized, contributor to global carbon emissions, according to researchers from the University of Sydney (Australia) and Beijing Technology and Business University (China).

In an analysis of data from 74 countries and regions, the researchers examined the carbon footprint of food-miles associated with the movement of food products from origins to destinations. In 2017, food transportation added emissions equivalent to 3.0 gigatons of carbon dioxide to the atmosphere, up to 7.5 times what was previously estimated. When considering transport, production and land-use change in the food sector, transport accounts for 19% of total food-system emissions.

Wealthy nations were responsible for generating nearly half of international food-transport emissions, despite accounting for only around 12% of the global population. These nations rely extensively on refrigeration when moving fresh fruit and vegetables, which is extremely carbon-intensive, and transporting these products generated twice the amount of CO2 produced by growing them. Low-income countries, 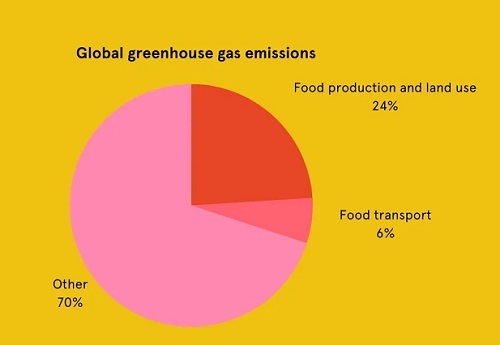 Source: University of Sydney where about half of the global population resides, were the source of just 20% of international food-transport emissions.

According to lead author Dr. Mengyu Li from the University of Sydney, “Our study estimates global food systems, due to transport, production, and land use change, contribute about 30% of total human-produced greenhouse gas emissions. So, food transport — at around 6% — is a sizeable proportion of overall emissions.

“Food transport emissions add up to nearly half of direct emissions from road vehicles.”

The study published in Nature Food recommends reduced consumption of red meat and increased emphasis on consumption of locally produced fruits and vegetables to alleviate the greenhouse gas emissions associated with the food trade.