Even under fixed electrical conditions (supply voltage, input, and load), electronic circuits are not perfectly stable as they tend to drift with time and temperature. These deviations from the ideal behavior can add a considerable error to precision measurements. To gain insight into temperature drift in electronics, this article briefly looks at the temperature behavior of resistors and amplifiers. We’ll also discuss that the effect of the flicker noise might not be easily distinguishable from a temperature-induced drift in the output. Finally, we’ll discuss that drift can limit the effectiveness of the signal averaging technique that is commonly used to increase the accuracy of repeatable measurements.

Luckily, in many applications, the circuit accuracy is determined by the ratio of two or more resistors rather than the absolute value of a single resistor. In these cases, a matched resistor network, such as the LT5400, can be used. The resistors form a common-substrate network and exhibit well-matched temperature behavior. Figure 1 compares the temperature behavior of a single discrete resistor with that of a matched resistor network. 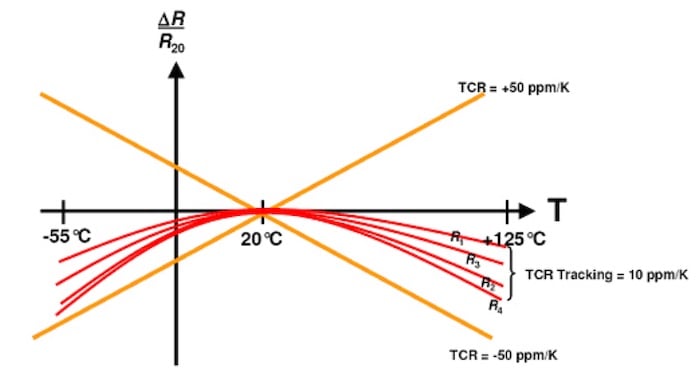 In this figure, the orange lines specify the limits for the change in the value of a single ±50 ppm/°C resistor as the temperature changes in either direction from the reference temperature (20°C). The red curves correspond to four resistors from a matched resistor network that exhibit similar temperature behavior. Temperature coefficients (TC) of the matched resistors track one another, typically to within 2–10 ppm/°C. Resistors with well-matched temperature behavior can be a fundamental requirement in certain precision applications such as resistive current sensing.

It should be noted that, even with identical TC values, the resistors in a circuit can generate a temperature-dependent drift. Below you can see an example in Figure 2. 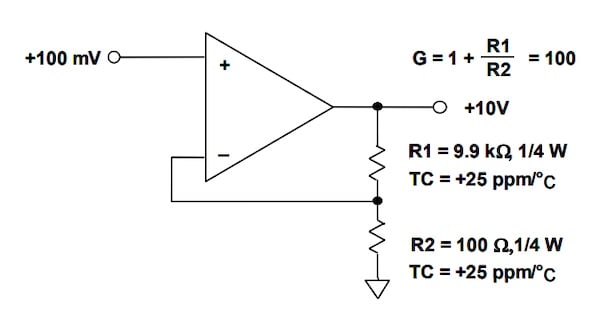 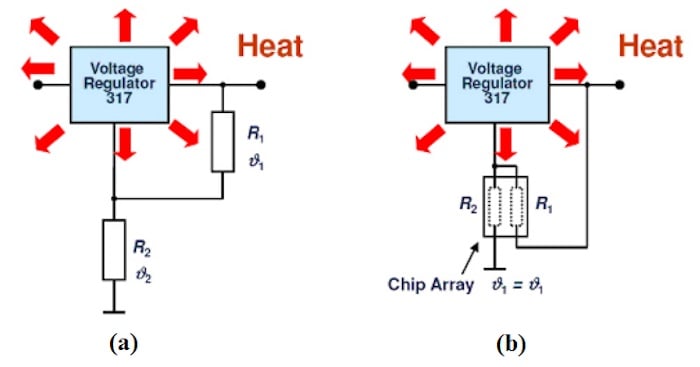 A resistor array can be used to avoid the drift issue of the above examples (Figure 3(b)). With a resistor network implemented on a single substrate, the two resistors are thermally coupled and experience the same ambient temperature.

If the offset drift of an amplifier limits the accuracy of our measurements, we can consider the use of a chopper-stabilized amplifier. These devices use offset cancellation techniques to reduce the offset voltage to a very low level (e.g., less than 10 μV) and yield a near zero-drift operation. The offset drift of a chopper-stabilized amplifier, such as the MCP6V51 from Microchip, can be as low as 36 nV/°C. 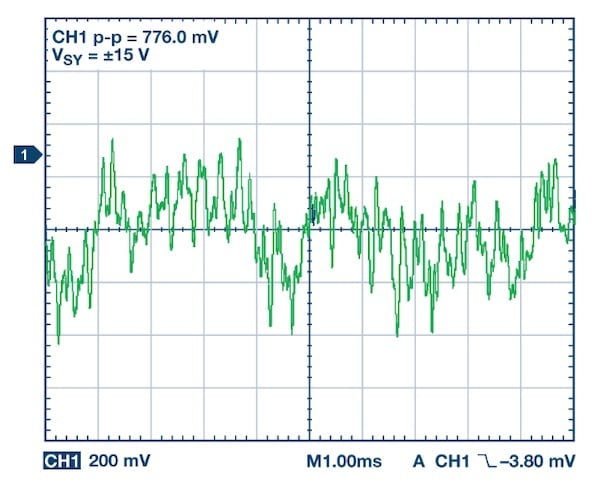 Figure 4. The amplified fluctuations from the flicker noise of the ADA4622-2’s output. Image used courtesy of Analog Devices

The ADA4622-2 is a precision op-amp with a 0.1 Hz to 10 Hz noise of 0.75 μV p-p typical. The figure above’s waveform shows the 0.1 Hz to 10 Hz noise of the ADA4622-2 amplified by a factor of 1000. As you can see, the flicker noise causes random slow fluctuations in the output. These fluctuations are produced by a phenomenon different from the temperature- or aging-induced drift. However, due to its low-frequency nature, the effect of the 1/f noise might not be easily distinguishable from a drift in the signal. 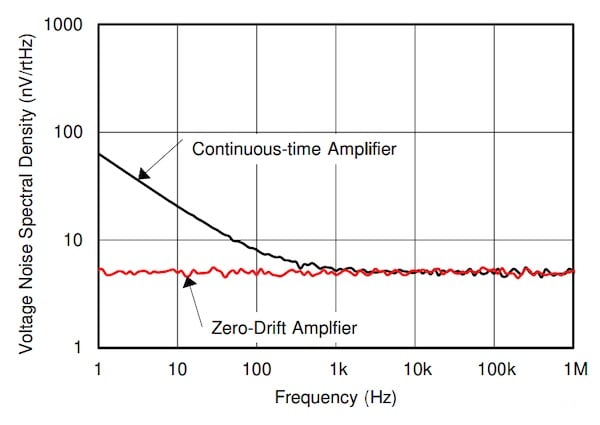 Figure 5. The noise of a continuous-time amplifier vs a zero-drift amplifier. Image used courtesy of TI

Drift Can Limit the Effectiveness of Signal Averaging?

Another effective noise reduction technique is signal averaging. If we have a repeatable experiment with a noise variance of $$σ_n^2$$, we can repeat the experiment M times and average the corresponding output samples to reduce the noise variance to:

Where $$σ_{n, avg}^2$$ denotes the noise variance of the averaged signal. Despite signal averaging’s effectiveness in certain applications, it still has its limitations. Signal averaging is based on the assumption that the noise samples are not correlated with each other. A slow drift in the measured data can act as a low-frequency correlated noise component and limit the effectiveness of the signal averaging technique. In this case, the noise suppression will be lower than that predicted by Equation 1. Additionally, depending on the type of the random drift in a given application, the variance of the averaged signal can increase above certain values of M.

In another article, we’ll examine this limitation of the signal averaging technique more closely and introduce a useful statistical analysis tool, called Allan variance, that allows us to have a deeper insight into how the output of a circuit tends to drift due to different phenomena such as the flicker noise, temperature effect, etc.