This week, the scientific community has been talking about the first images from the newly-launched James Webb Telescope. The photos from the telescope can be seen as among the most detailed, extraordinary, and beautiful that humankind has ever taken of deep space.

The key to the other-worldly images is several advanced technologies aboard the telescope, all of which work together to generate detailed images that have never been seen before.

In this article, we’ll look at some of the imaging hardware on the James Webb Telescope to better understand how the telescope is providing such exciting results.

The primary imager being used on the James Webb Telescope is the device’s near-infrared camera (NIRCam).

The NIRCam, built by a University of Arizona team, is used to detect light in the infrared wavelength range from 0.6 to 6 microns. The goal of this imager is to detect light originating from stars and galaxies in the earliest process of their formation and stars in the distant region of the Kuiper Belt. 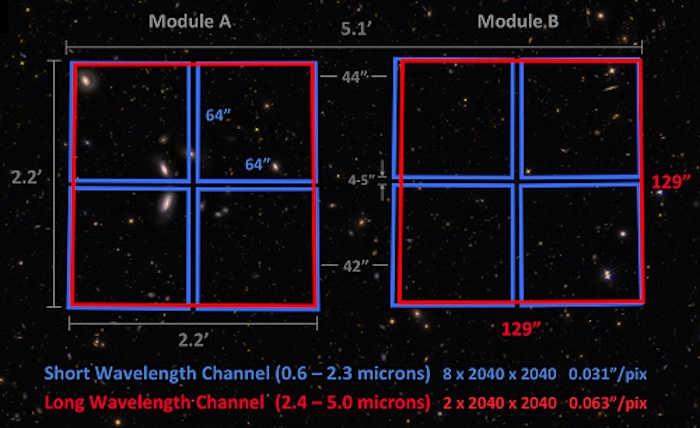 To image hard-to-detect objects, the NIRCam is equipped with many coronagraphs. These devices block light coming from a brighter object, allowing for imaging of fainter and dimmer objects nearby.

Architecturally, the NIRCam consists of two nearly identical, fully redundant modules, each of which points to adjacent fields of view in the sky. The two modules can be used simultaneously and can observe both the short wavelength channel (0.6–2.3 μm) and long wavelength channel (2.4–5.0 μm) at the same time.

Together, these tools make James Webb’s primary imager a powerful tool that can capture never-before-seen images of many of the most distant and dim objects in the universe.

One of the most exciting pieces of imaging hardware on the James Webb Telescope is the near-infrared spectrograph (NIRSpec).

NIRSpec can be best described as a multi-object, near-infrared spectrograph, a device that breaks incident light into its individual color components for more detailed analysis. The James Webb Telescope uses NIRSpec to detect near-infrared wavelengths to study star formation and the chemical composition of distant galaxies. 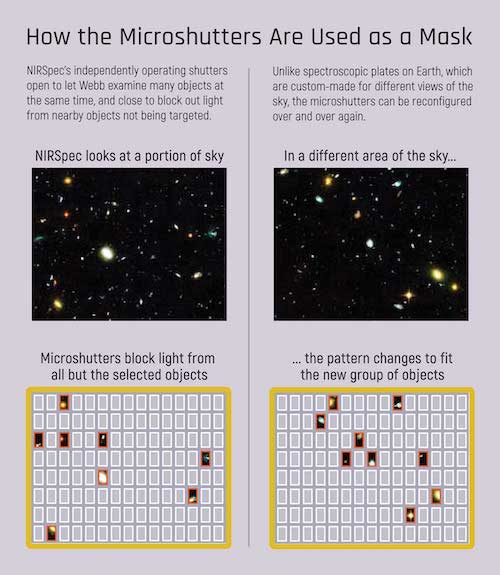 Working principle of the microshutters. Image used courtesy of NASA and STSci [click to enlarge]

One of the most impressive technological feats of NIRSpec is the device’s advanced microshutter assembly, which is a tool that allows NIRSpec to observe over 100 objects at once simultaneously.

The microshutter assembly consists of four 1.5-inch squares, each of which is its own array of 62,000 microscopic shutters. The shutters are 100 µm x 200 µm rectangles that open and close selectively, only capturing the light from an object targeted by the NIRSPec’s detector. From here, the light is aggregated into a single, intense point that captures the best possible image.

The arrays themselves are manufactured out of silicon nitride wafers, and the shutter doors are lined with magnetic strips that sit within an electrically charged metal box. The physical opening and closing of the doors work by applying an electric charge and corresponding magnetic polarization to each shutter.

In a resting state, a magnet sweeps over the shutters, repelling the magnetic strips on the doors and pushing them all open. Electronic controllers then apply voltages to the shutters desired to be closed, changing their magnetic polarization and closing the doors when the magnet sweeps by on a second pass through.

In this way, the microshutter system can ensure that the only doors left open are the ones aligned with the object scheduled to be observed by the NIRSpec.

The James Webb Telescope has already produced some extraordinary images in its short use time, which is due entirely to the innovative imaging technology onboard.

While this article only scratches the surface of what James Webb has to offer, it goes without saying that the imaging technology put together by the telescope team is amongst the best humanity has ever produced.

Interested in other space-related technology? Read on in the articles down below.

Team Up Blasts LoRaWAN Into Space for Satellite IoT Connectivity