Thermocouples are often one the most commonly used temperature sensors today. A thermocouple consists of two dissimilar conductors soldered or welded together at one end. These ubiquitous devices use the Seebeck effect to measure temperature.

This article takes a look at the Seebeck effect, laying the foundation for a discussion of thermocouples in the next article in this series.

Brief History of the Seebeck Effect

In 1822, Thomas Seebeck, a German physicist, noticed that a loop created by connecting two semicircular pieces of bismuth and copper can deflect a nearby compass when there is a temperature gradient along the loop (Figure 1). 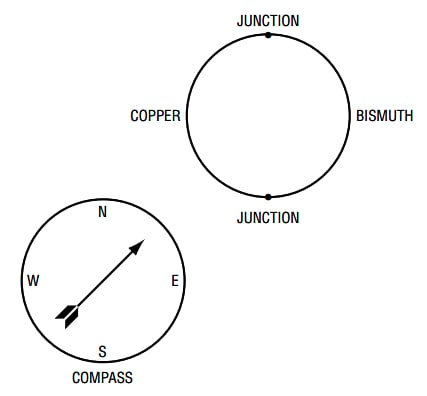 Seebeck’s friend, Hans Christian Oersted, who had published his discovery of the connection between electricity and magnetism in 1820, suggested that the needle should have been moved by a magnetic field generated by an electric current flowing through the loop. This was the first thermoelectric effect discovered. At that time, it was not easy to develop an explaining theory for the observed physical phenomenon because even basic concepts such as voltage, current, and resistance were not clearly formulated then. In fact, the mechanisms of this phenomenon were not well understood until the discovery of electrons in 1897.

It is also worthwhile to mention that the experiments conducted by Luigi Galvani, the discoverer of animal electricity, were also related to the Seebeck effect. In 1786, Galvani observed that the muscles of a dissected frog contract when touched by dissimilar metal probes.

Thanks to the efforts of many great minds in the history of science, we have a better understanding of physical phenomena such as the Seebeck effect. A detailed discussion of the theory behind the thermoelectric effects is beyond the scope of this article; however, a simplified intuitive explanation can still provide us with a basic understanding of this effect.

A higher concentration of the thermally agitated electrons in the hot end of the wire causes the diffusion of electrons from the hot end to the cold region. As a result of this thermally-induced electron diffusion, the hot region becomes positively charged compared to the opposite end of the conductor. Figure 2 shows how a temperature difference redistributes electrons and makes them travel from the hotter region to the colder end.

Figure 2. An overview of how temperature differences affect electron distribution from hot to cold. Image used courtesy of TI.

You may wonder, how long this redistribution of electrons is going to continue? The developed thermal voltage attempts to produce a current in the opposite direction of the thermally-induced current. As more and more electrons travel from the hotter to the colder end, an increasingly larger thermal voltage develops across the wire. At some point, this thermal voltage becomes large enough to counteract the temperature-induced diffusion of electrons. When this equilibrium is achieved, the net current through the conductor will be zero.

To assess the strength of the Seebeck effect in a given material, the Seebeck coefficient is defined as:

In Equation 1, ΔT is assumed to be small. Therefore, we can also define the Seebeck coefficient as the first derivative of the produced voltage with respect to temperature:

Figure 3 gives the Seebeck coefficient of aluminum as well as some other common materials measured relative to platinum.

The absolute Seebeck coefficient of a material cannot be directly measured by a multimeter. This is due to the leads of the voltmeter (as well as any other conducting materials at the input of the measurement circuit) can experience a temperature gradient and create additional Seebeck voltages. The voltage measured in this way will depend on the Seebeck effect of both the tested material as well as the materials used in the measurement circuitry. The absolute Seebeck coefficient can be determined by applying the Kelvin relation for the Seebeck coefficient. However, the relative value can be easily determined by measuring the output of a thermocouple circuit. 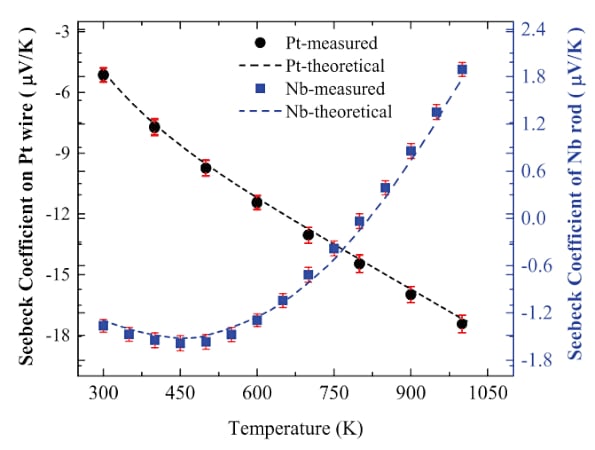 Figure 4. A graph showing the coefficients of Pt and Nb vs temperature. Image used courtesy of M. Gunes.

It should be noted that above a minimum size of submicron order, the Seebeck coefficient is independent of the material’s geometry, cross-sectional area, and length.

As mentioned above, the theory behind the thermoelectric effects is rather complicated. With some metals, such as copper, electrons travel from the cold to the hot end of the wire, leading to a positive Seebeck coefficient.