These robots will make your skin crawl: Part 2

In the first part of the article, “These robots will make your skin crawl”, Engineering360 looked at the various robots that have emerged which mimic creepy crawly insects and rodents. So far, it has covered snakes, cockroaches, rats and your standard, run of the mill bugs.

Part 2 will include a review of robots fashioned after grasshoppers, flies, beetles, earthworms and spiders.

Scientists from Washington University in St. Louis, Missouri, are turning the American grasshopper into a bomb-detecting cyborg.

To develop the cyborg grasshopper, the scientists reconfigured the insect’s olfactory system. Olfactory receptor neurons on the grasshoppers’ antennae already detect the presence of airborne chemical odors. During this process, the neurons send electrical signals to the grasshopper’s antennal lobe, a region of the grasshopper’s brain. In these antennal lobes, the team of scientists implanted electrodes. When introduced to vapors of assorted explosive materials, including trinitrotoluene (TNT), and 2,4-dinitrotoluene (DNT), different groups of the estimated 50,000 neurons located on each antenna reacted.

To further develop the cyborg grasshoppers, the team outfitted the grasshoppers with so-called sensor backpacks that recorded and wirelessly transmitted the electrical signal data to a computer immediately.

To see an earlier demonstration from the Washington University team of how the technology works when applied to locusts, watch the accompanying video.

Improving upon the design of insect-inspired microscopic robots, researchers from the University of Washington have developed a new flying microrobot capable of multi-modal locomotion.

Dubbed the RoboFly, the microrobot is reportedly an improvement upon its predecessor, the Robobee, which was developed by researchers from Harvard University. Setting the 74 mg RoboFly apart from similar insect-inspired microrobots is its ability to move through the air, on the ground and to hover over the surface of water, according to its developers. This is due to RoboFly’s flapping wings, which are powered by piezoelectric actuators, enabling it to fly and hover.

Another key difference between RoboFly and similar robots is its unique design, which simplifies the fabrication process. Microrobots are generally assembled using extremely tiny components under a microscope. This mode of fabrication is reportedly difficult with the potential for losing critical components during assembly. Instead, RoboFly’s chassis is composed of a single folded sheet of laminate, eliminating the need to assemble several microscopic components.

Researchers from the University of Southern California (USC) have developed a tiny robot that is powered by methanol and that moves via artificial muscles. 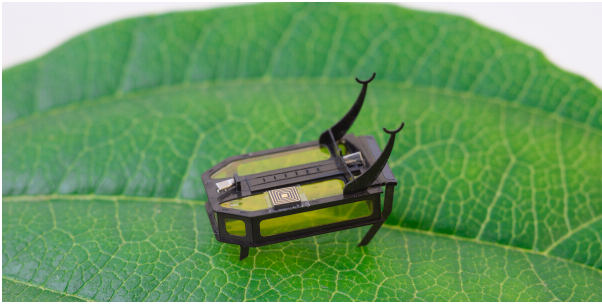 The 88 milligram RoBeetle autonomously climbs, crawls and transports loads more than two times its weight without benefit of motor or battery. Instead, the tiny robot moves thanks to a combination of methane, which stores 10 times more energy than a battery of the same mass, and artificial muscle comprised of nickel-titanium alloy (Nitinol) wires, which contract when heated.

Coated with a platinum powder, the wires contract once vapor from the RoBeetle’s fuel tank burns the wires while a network of microvalves close to prevent combustion. Once the wires cool and expand, more valves open, and the process is repeated until the fuel is depleted. These expanding and contracting motions enable the artificial muscles to move via a connected transmission mechanism.

At just 0.6 inches in length, the absence of a battery and a motor eliminates the bulkiness of small robots intended for applications that are either inaccessible or too hazardous for humans to undertake. As such, the RoBeetle shows promise for carrying out dangerous tasks such as infrastructure inspection or search and rescue missions, according to researchers. Likewise, the RoBeetle’s developers believe that the robot could be used for artificial pollination and environmental monitoring tasks as well.

Scientists from GE have demonstrated the tunneling capabilities of its prototype earthworm-inspired robot.

According to developers, the prototype soft robot quickly and efficiently created a 10 cm diameter tunnel under extreme and rugged conditions at GE’s Research campus in Niskayuna, New York.

The earthworm robot, which was designed to show how soft robots can move through confined spaces and make sharp turns, could potentially be used for repair and inspection tasks in addition to tunneling applications. It has been in development for more than a year.

To see the prototype in action, watch the accompanying video that appears courtesy of GE.

Robotics firm Nexxis has created a spider-like robot for inspecting equipment used in hazardous environments such as on oil and gas rigs. 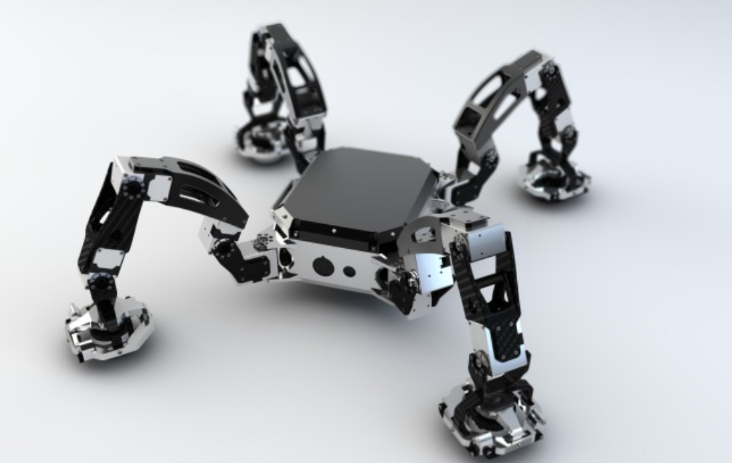 Magneto-EX, which was partially funded by National Energy Resources Australia (NERA), is a robotic camera inspection device that features magnetic feet. According to its developers, Magneto-EX can operate at heights, underground, in confined spaces and in industrial settings among toxic chemicals, all of which would prove dangerous to human inspectors.

Magneto-EX can reportedly maneuver through complex structures and narrow openings, and it is capable of placing its feet in small gaps and on narrow beams it might encounter in the course of inspecting oil and gas equipment. Additionally, Magneto-EX is appropriate for inspection applications for a host of hazardous environments beyond the oil and gas industry.

This is just a handful of the robots inspired by insect and rodent populations. Check back with Engineering360 for the latest in creepy crawly technology and so much more.