US tech controls squeezing the Russians 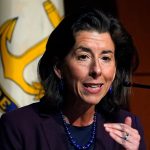 “Since the controls were put in place, global exports of semiconductors to Russia from all sources have declined by almost 90 percent,” said Raimondo, “leaving Russian companies without the chips they need for a wide variety of goods, including weapons like precision guided missiles and tanks.”

“Leading this initiative is our Export Enforcement team of special agents and analysts charged with investigating and holding those who violate our export controls accountable both criminally and administratively,” added the Secretary.

“Yesterday, we continued to make good on our commitment to aggressively enforce our Russia controls by identifying and adding to the Entity List various parties in China and elsewhere that contracted to supply Russia following the invasion of Ukraine,” said Raimondo.

A case in point is SMIC, China’s leading foundry.

“What if SMIC or other Chinese-based semiconductor companies are found supplying chips to Russia?” she said, “we will shut them down and we can, because almost every chip in the world and in China is made using U.S. equipment and software and I intend to make good on that commitment if it’s necessary.”

“And the aerospace controls we put in place are restricting Russia’s ability to generate revenue, resupply, and support its military aviation sector,” said Raimondo, “Russia may be forced to ground between half and two-thirds of its commercial aircraft by 2025 in order to cannibalise them for spare parts.”