Scientists at Massachusetts Institute of Technology (MIT) inspired by the luminescence of lightning bugs have built electroluminescent soft artificial muscles for insect-scale robots.

Like lightning bugs — which use their luminescence to communicate with potential mates, ward off predators and lure prey — the electroluminescence built into the soft artificial muscles of the flying robots could enable the robots to emit colored light as they fly. 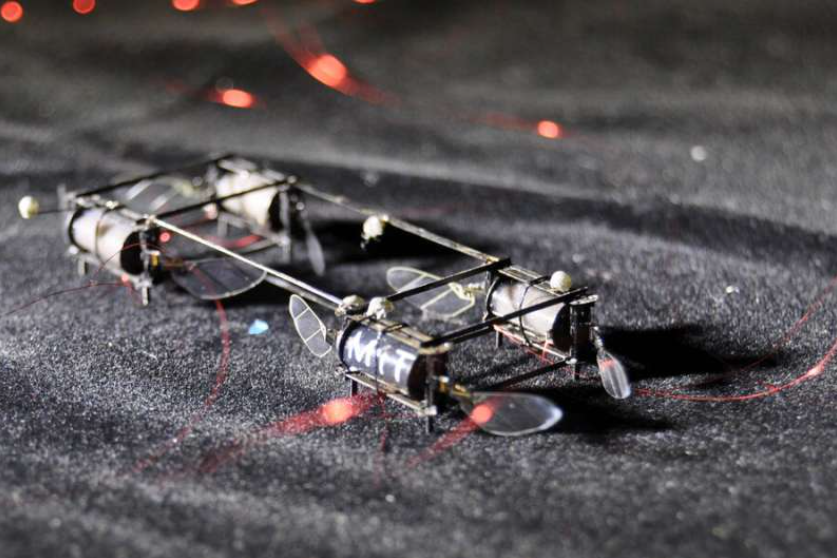 To achieve this, the MIT scientists incorporated electroluminescent zinc sulfate particles into the elastomer of artificial muscles, which were previously developed by the same research team. Once the particles were incorporated into the elastomer, the team then built an electrode that would not block light by using transparent carbon nanotubes only a few nanometers thick. This, according to the MIT team, allowed light to pass through.

Further, because the zinc particles only light up in response to a strong and high-frequency electric field, the researchers used high voltage to develop a strong electric field in the soft actuator, and then drove the robot at a high frequency, thereby enabling the particles to light up.

“Traditionally, electroluminescent materials are very energetically costly, but in a sense, we get that electroluminescence for free because we just use the electric field at the frequency we need for flying. We don’t need new actuation, new wires, or anything. It only takes about 3 percent more energy to shine out light,” the researchers explained.

Meanwhile, to change the color of the light, researchers modified chemical combinations of the zinc particles, initially enabling the actuators to shine one solid color — green, orange or blue — and eventually multi-colored and patterned light.

The MIT scientists envision using these light-emitting robotic insects in possible future search and rescue missions where such robots could use their electroluminescence to communicate with each other.

The technology is detailed in the article, FireFly: An Insect-Scale Aerial Robot Powered by Electroluminescent Soft Artificial Muscles, which appears in the journal IEEE Robotics and Automation Letters.

For more on the lightning bug-inspired robots, watch the accompanying video that appears courtesy of MIT.