Watch this octopus-inspired glove as it handles underwater objects

The so-called Octa-glove works much like the arms of an octopus when its suckers make a strong adhesive seal with objects of various shapes and sizes, according to the Virginia Tech researchers.

To accomplish this, an array of micro-lidar optical sensors for sensing nearby objects was incorporated into rubber stalks featuring soft actuated membranes. The researchers then connected the synthetic suckers and lidar via microcontroller to combine sucker engagement and object sensing to mimic the muscular and nervous systems of an octopus. 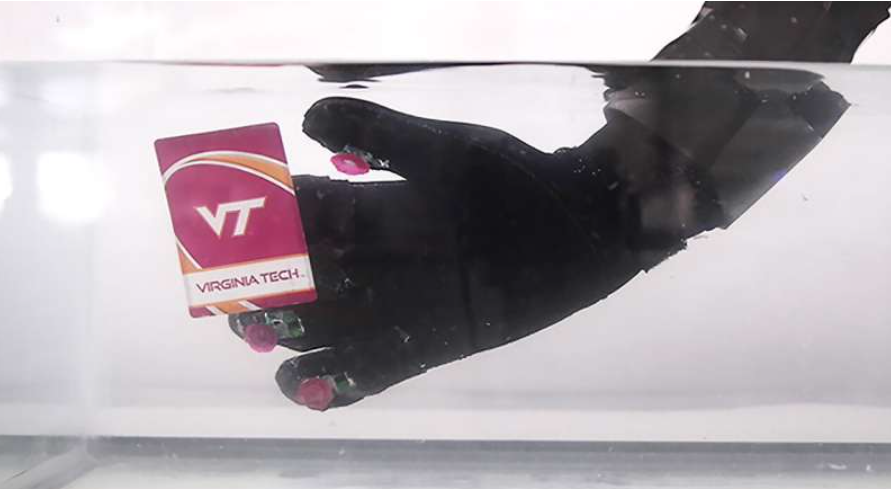 “By merging soft, responsive adhesive materials with embedded electronics, we can grasp objects without having to squeeze,” the researchers explained. “It makes handling wet or underwater objects much easier and more natural. The electronics can activate and release adhesion quickly. Just move your hand toward an object, and the glove does the work to grasp. It can all be done without the user pressing a single button.”

In the lab, the Virginia Tech team demonstrated that the Octa-glove could successfully grasp assorted objects of various shapes, sizes and material compositions.

The Virginia Tech team is eyeing the Octa-glove for use in the healthcare industry, underwater rescue applications, underwater salvage and archeology tasks, and for assembling and manipulating wet objects in the manufacturing space.

The article, Octopus-inspired adhesive skins for intelligent and rapidly switchable underwater adhesion, which details the Octa-glove, appears in the journal Science Advances.