There are some tasks that are just better handled by working dogs. This is true for many applications where a dog’s physical speed and agility, heightened sense or read of animal body language is outright better than a human’s. Working canines play key roles in multiple security, detection, agricultural and draft applications.

As with any physical task, there are inherent safety risks. But as with people, safety risks to a working dog can be mitigated by outfitting the animal with the right equipment.

Here is a list of some of the most important PPE that takes a working dog from man’s best friend to man’s best colleague.

Faced with deadly weapons, military and police dogs display true courage as they help their handlers find, capture and detain adversaries. It is the only application where violence is an accepted risk, and as such, many of these dogs are provided highly manufactured ballistic vests to decrease, but not eliminate, risks from firearms and sharp implements.

Most commonly, these stab-proof bulletproof vests are made from the same aramid materials as a human’s. Kevlar 29 is probably the most well-known aramid fiber, but multiple aramid fiber types are suitable for the application. Aramid is a type of synthetic polyamide fiber that has relatively high molecular cohesion along its length. This provides it with the yield and tensile strength, and elongation, that can stop many bullets and knives. Ceramic or steel plating is another option, but typically restricts the garment’s flexibility, and therefore agility from the dog.

The vest also likely contains a handle or harness, which enables handlers to pick up and lower the dog from vehicles. Some military dogs are airlifted into and out of aircraft along with their fire team. Meet K9 Callie in the video below, a member of the U.S. Air Force’s search and rescue team. Due to her unique work, she is outfitted with vests, harnesses, eye goggles and ear muffs.

Dogs for military or police tactical work may also need a muzzle, which is more to protect curious onlookers who might mistake the dog as a pet to nuzzle or scratch.

Dogs trained to find and apprehend individuals are trained much differently than those used to detect contraband, such as drugs or weapons, or perhaps people, most often for police work. Since they aren’t usually on the front lines, their protective needs are different. They do not need the armor protection, but are better enabled by a harness or vest that identifies them as a working police dog, along with handles or slings for being physically lifted.

Closely related to police detection dogs, airport dogs most commonly search for illegal contraband. However, in this setting it may also include animals, plants, currency or other items travelers may try to smuggle. Once again, these dogs are not pets, and should be equipped with vests or harnesses identifying it as a working animal.

Increasingly, dogs are being used to provide nuisance animal control for runways. They can effectively chase away birds, rodents and small mammals from runways, which have historically complicated take-offs and landings, and rarely caused plane crashes. Again, a vest or harness is an effective way to identify and lift the dog, although these garments should be a high-visibility color. The dog may also be exposed to wind blown dust or debris, from prop or jet wash or by being driven around the airport facilities in a truck or UTV. This likely requires the use of protective goggles or eyewear. If the dog is regularly near aircraft, earmuffs are recommended as well.

In addition to a high-visibility vest, search and rescue dogs are often equipped with a GPS or radio collar, so the handler can monitor the dog’s location, and perhaps communicate, despite the dog being out of eyesight. This also helps monitor progress of a search location and mark sites that may need further investigation by a human. The handler may have a distinct radio, handset or beeper that helps keep track of the dog, distance and if they have stopped moving.

These dogs also benefit from discrete footwear. In certain search and rescue scenarios, the dog may be tasked with crawling over building rubble or other sharp debris, where footwear can prevent injuries. More importantly, footwear can assist the dog with traction in a variety of settings. 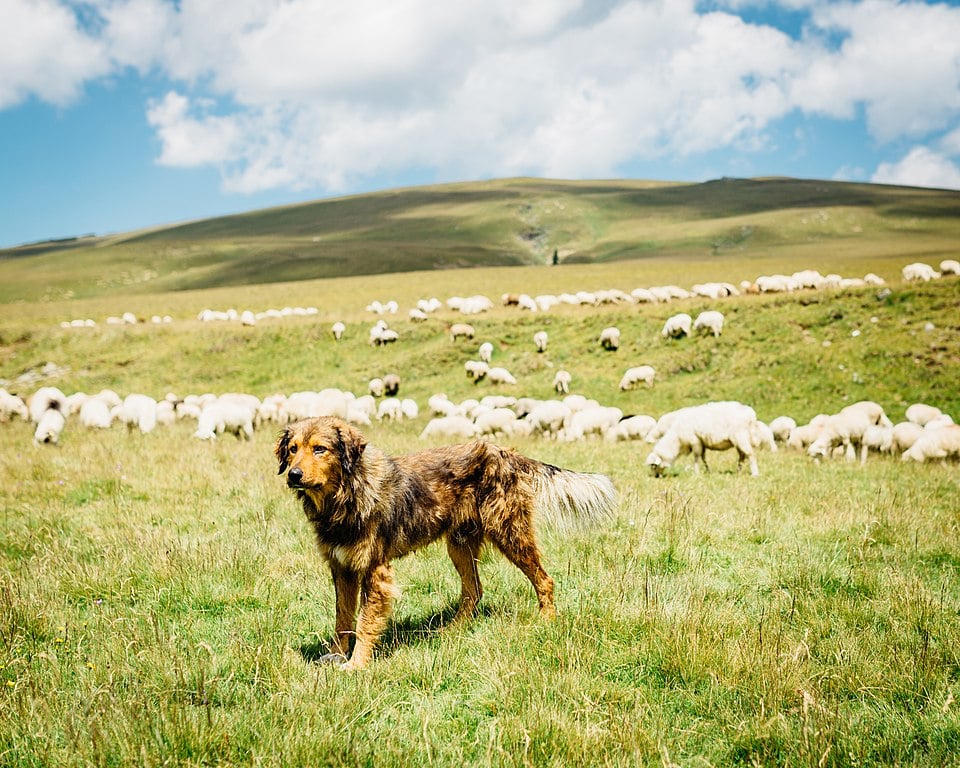 Herding dogs have an innate ability to guide and guard livestock, but should be properly equipped for the task at hand. Source: Robert Anders/CC BY 2.0

Dogs used for guiding, observing and defending groups of livestock or chickens have relatively simple needs. Perhaps most importantly, equipping these animals with a breakaway collar ensures they do not get stuck wile crawling under fences or navigating branches. These types of collars are advisable for most dogs, including pets, as the buckle will give away once a certain amount of tension is applied.

Herding dogs may also benefit from GPS or radio collars, depending on the the anticipated patrol range of their duties. If the local climate is prone to extreme temperatures, thermal gear is advisable as well.

Although this is typically recreational in nature for their humans, dogs find themselves helping hunters locate and catch a variety of game. Hunters should be keenly aware that a dog romping through the forest may look like a deer, so hunting dogs should be provided a high-visibility vest or coat to prevent confusion. If the dog will be tasked with amphibious retrievals, such as a duck or goose, the vest should provide buoyancy so the effort the dog exerts while swimming is lessened.

Finally, ear protection for the dog should be considered, as the report of gunfire can cause hearing loss in humans, let alone their more sensitive canine companions. 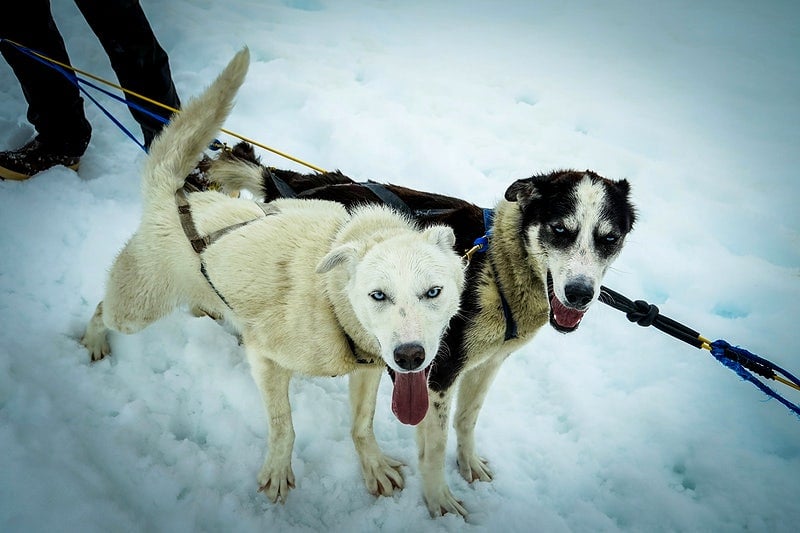 Sled dogs exert pulling force from their harness to the tugline to the gangline.Dogs actually used to be a more common means of transportation, with several cultures using them to pull wagons or skis, prior to the widespread use of automobiles. Today, using dogs for drafting purposes is limited almost entirely to sled dog teams. Sled dog teams are often between four to ten individual dogs.

Sleds are equipped with ganglines that extend from the front of the sled; dogs are attached from the harness to the gangline via tugline. When the team pulls together, they exert enough force to pull the sled. Because the harness is critical to ergonomic comfort and pulling efficiency of the dog, it is an extremely important piece of sled dog safety gear. Harnesses may vary from dog to dog, and some are designed for freedom of movement or pure pulling power. Ideally, harnesses keep the pulling load and stress on the dogs’ legs low. Dogs may also be attached to the gangline via a neckline, although no force is exerted through it.

Sled dogs will also require booties to prevent cuts and snow packs on the paw. In addition, dogs may require winter weather gear — jackets, wraps, leggings — to keep them warm in extremely cold temperatures (less than -10° F) or when resting.

There is an immense focus on outfitting PPE for workers in industrial settings. And for good merit, as safety gear is critical to employee health as well as employer productivity.

The same considerations should be extended to working canines, in a variety of industries. Just as employers are required to outfit workers in the right safety gear, so too should dogs’ handlers and employers.