The desire to integrate electronics more seamlessly into our lives has sparked an interest in the field of flexible electronics. Use cases like flexible displays and electronics embedded into clothing or the human body are gaining in popularity, and to achieve them requires a new take on conventional electronics.

One promising technology for achieving flexible electronics is the organic transistor. 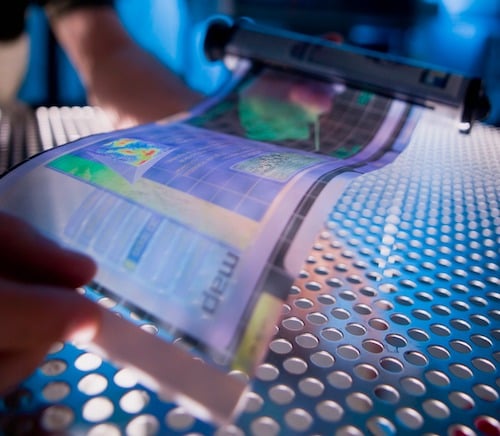 Last week, researchers at TU Dresden made news in the field of organic electronics when they announced the first-ever demonstration of organic BJTs.

In this article, we’ll talk about organic transistors, the challenges they face, and the new research from TU Dresden.

What are Organic Semiconductors?

One of the primary benefits of organic electronics is their compatibility with simple fabrication techniques that can occur at relatively low temperatures compared to silicon electronics. On top of this, organic semiconductors often offer impressive material characteristics such as high mechanical flexibility, higher natural abundance, and lower cost. Thanks to this combination of features, organic semiconductors can be printed onto flexible substrates like plastics, clothing, or even the human body.

All of this has led to organic semiconductors being considered a key component in creating flexible electronics in the future. Today, organic LED (OLED) displays are the most popular application of organic semiconductors, offering improved image quality and thinner designs than traditional LED displays.

Even though organic semiconductors have found applications in display technology, to this point, the only transistors that have been achieved with the technology have come in the form of organic field-effect transistors (OFETs). While OFETs have developed significantly in the decades since they were first created, several challenges still hinder their mainstream adoption. 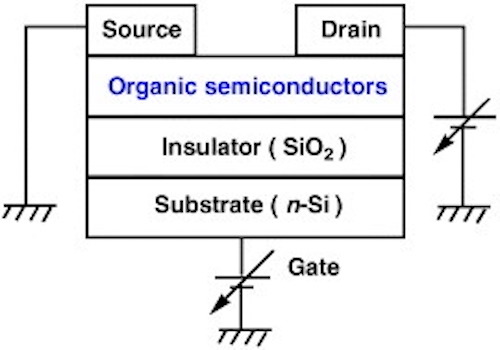 Structure of an OFET. Image used courtesy of Yoshiro Yamashita

One challenge is that organic materials are traditionally insulators, meaning that organic transistors tend to have substantially lower charge carrier mobilities than their silicon counterparts. This attribute, combined with large overlap capacitances and contact resistances, ultimately limits the speed, power efficiency, and frequency range with which OFETs can operate.

Most research to date has only ever reported OFETs working in the low-to-medium megahertz range, a frequency range that does not allow for extremely broad application.

Ideally, we would have organic transistors that offer both low capacitance and contact resistances, which would allow for higher performance and better frequency response. To this end, the OBJT has been highly sought after but has not yet been realized because they rely on a precisely doped base layer, making manufacturing a challenge.

Last week, researchers from TU Dresden made significant news in the field when they announced they were able to create the world’s first high-efficiency OBJTs.

As described in their paper in Nature, the researchers addressed the manufacturing challenges facing OBJTs by developing their device based on crystalline films of n- and p-type doped rubrene.

When describing their process, they started with depositing a thin layer of amorphous rubrene on a substrate by vacuum deposition and then annealing the rubrene in a nitrogen atmosphere to initiate crystal growth. Compared to conventional crystals grown on furnaces, these crystalline films are made directly on the surface of a substrate, which has benefits for mass production.

The structure of the organic BJT. Image used courtesy of Wang et al

The results of this technique were extremely positive, as the researchers were able to perform both n- and p-type doping and deliver a transistor with a thickness of approximately 1 µm and high vertical mobility of about 3 cm2 V–1 s–1.

The result was an OBJT that achieved a unity gain frequency of 1.6 GHz, marking the first organic transistors to reach the gigahertz frequency range.

The researchers are lauding their results, calling their OBJT a huge step towards the successful commercialization and production of ultra-fast, organic transistors for the future of flexible electronics. It will be interesting to see how else this technology will progress with this feat accomplished.