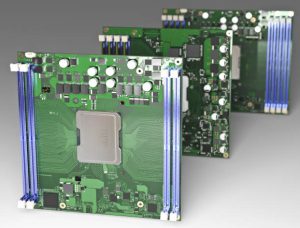 Processors with up to 20 cores are available, alongside four DRAM modules – half the number available on the larger size E COM-HPC Server modules. Up to 512Gbyte of DDR4 RAM at 2,933Mtransfer/s can be found.

“Mixed-critical edge server applications don’t have to handle RAM-intensive server workloads,” said company head of products Martin Danzer. “Rather, they need to host multiple real-time applications side-by-side and therefore require as many cores as possible. They also must meet the demands of industrial communications with many small message packets that need to be processed in real time. Again, memory is not as critical compared to database-driven web servers that are used by thousands of people in parallel.”

For real-time networking there is 1x 2.5GbE with TSN and TCC support on top of an Ethernet bandwidth of 100Gbit/s in various configurations including 1x 100GbE, 2x 50GbE, 4x 25GbE as well as several other configurations via KR or SFI interfaces.

For non-volatile storage, there is an option of up to 128Gbyte of integrated eMMC 5.1, as well as 2x SATA III interfaces.

Board support packages for Windows, Linux and VxWorks are available. For workload consolidation, real-time virtual machine support is available via RTS Hypervisor implementations from Real-Time Systems.

Active and passive heatsinks are available.

Applications are foreseen in IIoT-networked factories or infrastructure.