ZapBatt is working with Toshiba to bring out lithium titanium oxide (LTO) battery cells for the micro-mobility marketplace. 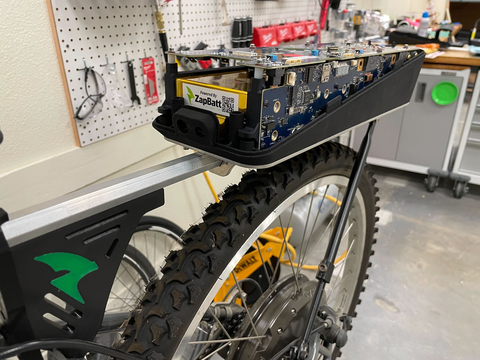 ICs did not exist to work with LTO, but ZapBatt’s custom LTO optimized battery management system (BMS) works at the unique voltages of LTO with the ability to be re-configured to adapt as the cell chemistry grows, enabling a programmable chip that can work with other chemistries and voltages.

ZapBatt’s bi-directional adaptive terminal voltage (BATV) technology allows for voltage control of the battery system digitally with software. This is like a ‘universal adapter’. It allows LTO to be a one-for-one swap of any lithium-ion chemistry without the customer modifying their system allowing the batteries to be re-configured for other applications at software speed.

Energy density is a system challenge, and integrated AI allows the battery to improve the system’s performance by analysing how energy is being used, such as enhanced regenerative braking for e-bikes. Other battery chemistries don’t have the flexibility to move energy in and out as quickly.

Toshiba’s LTO cells are suitable for micro-mobility applications because their SCiB Cells are designed for fast charging and high-power environments with a minimal decrease in function even after thousands of charges and uses.

The cells are claimed to provide up to a 100% usable charge without shortening cycle life, allowing for longer use. Additionally, the cells perform in freezing temperatures as low as -30 degrees celsius, compared to 0 degrees celsius for typical Li-ion.

On top of the ability to perform in freezing temperatures, the cells reduce operating expenses and e-waste and eliminate fire risk with the use of ZapBatt’s LTO system. LTO batteries have virtually no risk for self thermal runaway.

The lack of carbon on the anode surfaces and lack of oxides of nickel, manganese, cobalt and aluminium mean that the battery chemistry is effectively immune to thermal runaway and battery fires.

Along with the Toshiba SCiB cells, ZapBatt software uses a combination of machine learning and proprietary hardware to continuously improve battery performance. The company’s software analyses 26 data points, illustrating how the battery performs to improve charging operations, essentially talking to the battery and making changes. Over time, the batteries will provide data, allowing the system to become even more energy efficient.

ZapBatt has developed technology acalled BATV or Bi-Directional Adaptive Terminal Voltage. This technology allows the system to control the battery voltage input/output all digitally with software, allowing LTO to integrate into a broad variety of applications.